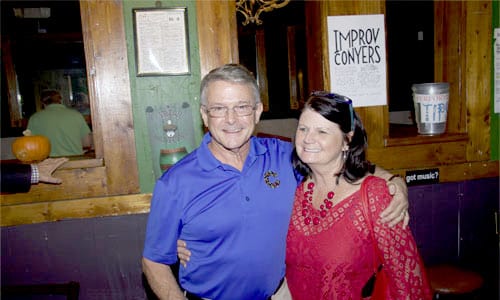 Vince Evans and his wife, Cyndi, are all smiles as they celebrate his victory at the Celtic Tavern in Conyers. Photo by William E. Thomas/Special to OCG News

E vans, who served 18 years on the City Council (the last 8 as mayor pro tem) will succeed Randy Mills, who served as mayor of Conyers for two decades and did not seek re-election, deciding instead to spend more time with his family.

At his victory celebration, which was held at the Celtic Tavern, Evans thanked those who supported him, including 80 people who donated to his campaign. He also thanked his wife, Cyndi, who joined him on the campaign trail as he walked door to door stomping for votes.

“This was a difficult thing to do…knocking on doors, making phone calls, it was tough,” said Evans.

Ronnie Godwin came in second with 301 votes or( 28.6 percent), while Olivia Ware received 198 votes or 18.8 percent. Godwin campaigned on a promise to address “the culture—from the chief down to the newest employee,” while Ware campaigned as the only black Democrat in the non-partisan race seeking to improve economic development and the city overall.

Evans promised to make public safety a top priority, equipping police officers with training and the tools needed to build better relationships with the community. He said he would advocate for more funding for parks, push for more diversity on city boards, and look for ways to bring more businesses into downtown Conyers.

Elections Director Cynthia Welch had predicted a light turnout for the election—about 12 percent (roughly  1,000 of the city’s 8,000 registered voters) and her projections were correct. According to preliminary results, 1,054 of the city’s 7,681 voters cast ballots.

The light turnout persisted, despite allegations and rumors as Election Day neared. The Georgia Secretary of State’s Office was investigating allegations that Godwin promoted on his FB page that a Shell Station in Conyers was giving the first 100 early voters $5 of free gas if they showed their “I Voted” stickers and identification proving they lived in Conyers.  Welch said she visited the station to let the owners know that giving freebies and requiring voters to show their “I Voted” sicker and personal identification is against the law. Freebies are fine as long as they are offered to everyone, she said.  Also, the Conyers Housing Authority informed the public in a Facebook post that there was no truth to an allegation that residents would be evicted, if they didn’t vote for Godwin.

The Conyers elections served as a pilot for the state’s use of new system, which provided voters with a paper ballot to verify before feeding the printed ballot into a tabulator.

Below are the unofficial results for the Conyers City Council races: