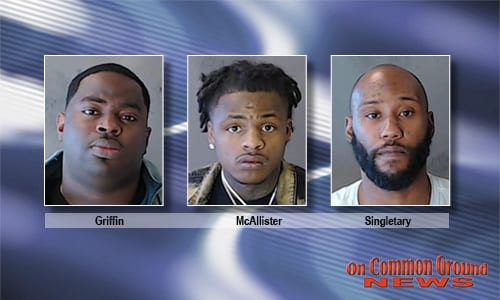 The DeKalb County Sheriff’s Office has arrested two more suspects in the murder of a man during an alleged armed robbery that occurred in Brookhaven on Nov. 30.

The Sheriff’s Fugitive Unit, assisted by the U.S. Marshal’s Office, arrested Stephen D. McAllister, 24, of College Park and Quintez M. Griffin, 21, of Atlanta on Dec. 11. Both were charged with felony murder, aggravated assault, armed robbery, and possession of firearm by convicted felon.

The warrants allege that McAllister and Griffin shot Carthel Lamont Johnson, Jr. and Roderick Levelle Francois during an armed robbery at an apartment complex.  Johnson died on the scene, according to the warrants.  Both victims were found at a Waffle House near the apartment.

Sheriff’s investigators located and apprehended McAllister in College Park.  Griffin was arrested at an Atlanta location and transported to the DeKalb County Jail.

A third suspect, Pierre Gregory Singletary, 34, of Brookhaven, was arrested on Dec. 6 after police issued an alert for assistance in locating his whereabouts.

next32 DeKalb schools honored by Gov. Deal for ‘Beating the Odds’