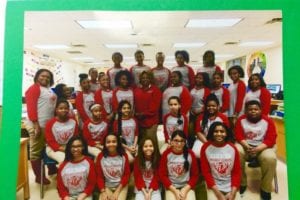 Tucker Middle School teacher Christine Mayfield is calling on the community to lend a hand. Her students recently competed in the Georgia Family, Career, and Community Leaders of America (FCCLA) state competition in March where 15 of them qualified to compete in Nationals. Now, they need the community’s help in raising $7,000 to compete in finals at the 2016 National Leadership Conference, which will be held July 3-7 in San Diego, California. They have less than a week before they lose their deposit and all the money they have raised so far.

“We are raising money for our 2015-2016 regional and state winners that are now advancing to the National FCCLA STAR Competition,” said Mayfield who has served as advisor for Tucker Middle School FCCLA since 2011. “Tucker Middle School is the only middle school in DeKalb that has advanced to nationals in the past four years.”

FCCLA is a co-curricular club associated with the Family and Consumer Science (FACS) course, formerly known as Home Economics. It is the only national, student-led organization with family as a primary focus, emphasizing community, leadership, team building, self-awareness, and self-esteem building skills.

“Last year, the students attended Nationals in D.C., thanks to numerous fundraisers and two very handsome donations and a special group rate offered by Amtrak,” said Mayfield. “This year, the competition is across the country and we have to raise funds for airfare, lodging and chaperones.”

Mayfield says the kids’ parents have pledged to pay $1,000, but still need an additional $500 per student to cover registration, hotel lodging and chaperones.

“We have tried everything – carwashes, bake sales, dinners, but those are just drops in a bucket. We’re so far in, we would actually lose money.”

Mayfield said the students have already paid money as a deposit to secure the students’ spot at the convention.

“The students are very excited to have made it so far. It would be a shame for these kids not to be able to go because of $7,000.

Mayfield said that if they are able to exceed the fundraiser’s $7,000 goal, the extra money will be allocated to next year’s competition in Nashville, TN.

“I believe we’re going to get it, somehow. I want my students to remember the first time they flew on a plane and the first time they met a student outside of DeKalb County. I want their confidence to soar when they compete by presenting to the judges and evaluators who come to me and say how proud of my students they are for outstanding presentations.”

The deadline to raise the money is June 15. To make a donation, visit the organization’s Go Fund Me page at www.gofundme.com/263p5us or contact Christine Mayfield at christine_mayfield@dekalbschoolsga.org or by telephone at 678-875-1005.

previousDroves flock to show support for “I Am A Father” 5K