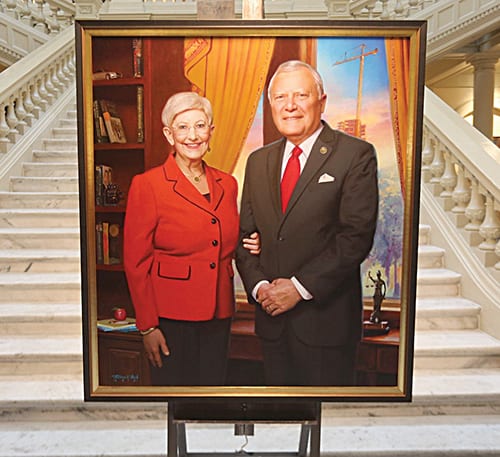 The official portrait of Georgia Gov. Nathan Deal and First Lady Sandra Deal was unveiled on Jan. 3 at the Georgia State Capitol, a tribute honoring Deal as Georgia prepares for his successor, Gov.-elect Brian Kemp, to be sworn in on Jan. 14. Both, Deal and Kemp, are Republicans.

The portrait, painted by Thomas Nash, will be displayed outside the governor’s office on the second floor of the Capitol.

Deal and his wife were joined on Jan. 3 for the unveiling by chief of staff Chris Riley and House Speaker David Ralston.

“We should all be mindful that the accomplishments of the last eight years are not something I did alone,” said Deal. “No single office or person should seek credit for such efforts. All of the things symbolized in this portrait were made possible by unsung heroes who had important roles in bringing various initiatives to fruition, and for that I am truly thankful. So many people are a part of this portrait, as we are all committed to furthering the gains we have made, and we are all dedicated to a stronger economy, better opportunities through education and a state that values justice. I am indeed proud of what we have achieved, together, these last eight years.”

The portrait includes various items that symbolize achievements of Deal’s time in office, including:

“For the past eight years, Sandra and Nathan Deal have made history here in Georgia,” said Ralston. “Today, we pay tribute to them as they become part of the history of our state. To put it succinctly, Georgia is better because of Sandra and Nathan Deal. We have been able to achieve so much because of a strong partnership between the legislature and the governor’s office, as Gov. Deal has viewed the legislative branch of government as a partner and respected the important role it plays in state government.”

“As someone who witnessed Gov. Deal interact, lead and listen over the last eight years, I find myself in awe of this portrait that reflects the characteristics of Nathan Deal and Sandra Deal,” said Riley. “I look forward to bringing my grandchildren to see this portrait and explaining what we did here in Georgia. Gov. Deal isn’t an example by which all others should be measured, but he is certainly an example they should follow. I am so proud to have served alongside Gov. Deal these last eight years, and I hope others will choose to follow his example in the future.”