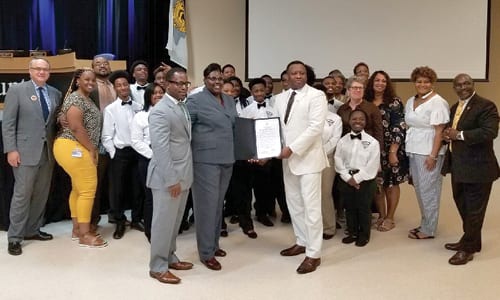 Towers High School senior Michael Elliott ended his last semester on a high note like none other. He was among a group of 18 Towers’ students who traveled to Europe during Spring Break. The trip marked the first-ever international trip in the history of the 52-year-old school, which was founded in 1966.

The Towers Titans Band traveled to London and Paris for a week filled with music education and cultural activities from March 28-April 4. The band, band director, parents and school principal visited cultural landmarks and worked with brass band music masters.

Elliott called the trip phenomenal. He said the trip would leave a legacy for future classes at Towers High.

“I never thought I would be able to go abroad, unless I was in the military or something. The way I was raised, I was never supposed to leave Decatur. I’m still in shock,” Elliott said. “Our prom was themed ‘A night in Paris,’ and we were in Paris. It was amazing. People doubted us, but we left our mark and will continue to leave our mark. You have to be committed. Towers will be going again next year. We’re going to go to Tokyo.”

The band received a proclamation from the DeKalb County
Board of Commissioners honoring the school’s accomplishment in May.

“The trip was phenomenal—it was explosive, it was beyond our wildest dreams,” said Towers band director Shawan Baptiste. “From the day we hit the ground running until we returned, it was great.”

The Titans visited cultural landmarks including Westminster Abbey, English Parliament and Trafalgar Square during their time in London. The travelers were also able, but not required, to observe the Easter celebration at St. Paul’s Cathedral, a historical landmark originally founded in the year 604.

“The kids actually climbed all of the Eiffel Tower stairs all the way to the top,” Baptiste said. “And why not? We had gone that far, why not see the peak of Paris?”

For Baptiste, a highlight of the trip was when band members took part in a master class with experts from the London Regional Brass Band, including an internationally-renowned conductor. The class included one-on-one lessons, an advanced music rehearsal and a performance of New Orleans-inspired jazz music.

“It was a very true cultural exchange,” Baptiste said. “This was a pivotal point of why we went on the trip in the first place: to conduct a music exchange and be taught by professionals.”

Baptiste credits Dunwoody High School band director William Henderson, who also attended, for providing guidance and ambassadorship throughout the trip. She said Henderson helped her plan, map out and tour both cities in an effective manner.

The Titans held several fundraisers for the trip including selling cupcakes and popcorn, holding fish fries, car washes, performances, and setting up a GoFundMe campaign. An anonymous benefactor also gifted the group $5,000.

Baptiste said the effort to raise money brought the Towers community together. The group raised about $35,000 within six months.

Towers junior Jelena Herriott, who baked cupcakes on a daily basis to help fund the trip, said the entire process was a great experience. She said she would always remember the trip.

“We went to the museum—that was one of my favorite places,” Herriott said. “The artwork, seeing it in person, physically, made such a big difference.”

Sophomore Jermaine Taylor said he enjoyed experiencing a different culture. He said he is proud to be a student at Towers after seeing what could be accomplished.

“I enjoyed everything,” Taylor said. “We believed in ourselves. We went out there, didn’t play around, and raised the money for the trip. We made it.”

Towers principal Vincent Denson also played a key role by purchasing the passport for each of the 18 students selected for travel.

“I’m ecstatic. To be the first international trip in school history, it speaks volumes,” Denson said. “It gave us a chance to visit cultures outside of Decatur, DeKalb County and Georgia, period. [Most of] our kids had never been on a flight, much less overseas. There was so much love for the process. It was so profound.”