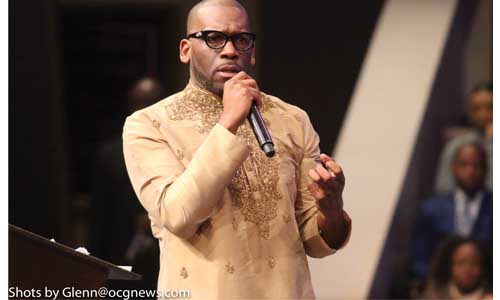 On Super Bowl Sunday, New Birth Missionary Baptist Church is sending a caravan of buses into Atlanta to pick up the city’s homeless. The DeKalb County mega church, located in the city of Stonecrest, is bringing those who are homeless to its worship service and a star-studded Super Bowl party that will follow with food and entertainment.

The “Soup and Souls” event is part of a larger initiative New Birth’s newly-appointed senior pastor, Dr. Jamal-Harrison Bryant, has launched to help combat homelessness in greater Atlanta. With a goal of collecting 5,000 cans of soup in just a few weeks before the Super Bowl, the congregation brought in more than 15,000 cans to give away to the needy.  Members purchased soup by the can and by the case.  Several held canned food drives at their businesses and schools.

The canned goods will be distributed to families in the Stonecrest/Lithonia area on Saturday, Feb. 2.  Homeless visitors also will enjoy soup and other party foods at New Birth’s Super Bowl party on Sunday, Feb. 3.

Pastor Bryant is excited about his congregation’s hunger to serve.

“While all of America will be focused on the entertainment of sports, it’s important that the Body of Christ focuses on the encouragement and the empowerment of spirits,” Pastor Bryant said. “Food insecurity is such an issue in this nation that it is not a game.  We want to make a touchdown for Christ by feeding as many people as we can.”

New Birth’s “Soup and Souls” event comes amidst Atlanta’s efforts to count the city’s homeless for the U.S. Census report. Teams of census workers hit the streets the week of Super Bowl, braving the cold as they looked underneath bridges, along sidewalks, inside shelters and other areas in search of people down on their luck. Survey workers handed out $5 gift cards from McDonald’s to those who took the survey.

In 2018, Atlanta reported 3,076 homeless people, a 14 percent decline from 2017. But according to Atlanta Journal-Constitution columnist Bill Torpy, many homeless individuals are overlooked during the census count as they move around to keep warm during freezing weather or wind up in the hospital. In December at least 11 homeless people died from hypothermia.

New Birth officials said it is their hope the Soup and Souls event will bring a little warmth this winter season while cultivating a culture of kindness within the church congregation.

New Birth’s members were challenged to see who would bring in the most cans – the under-age 45 group or over-age -5 group.  It was a friendly competition, which Pastor Bryant referred to as “Black Lives Matter” vs. “Civil Rights.”  The over-45 group won the challenge, although the younger group was diligent and creative about fulfilling the task, church officials said. Delta Sigma Theta and Alpha Kappa Alpha sororities donated hundreds of cans of soup for the Soup and Souls project.

Delta Sigma Theta and Alpha Kappa Alpha sororities donated hundreds of cans of soup for the Soup and Souls project.  New Birth’s members were challenged to see who would bring in the most cans – the under-age 45 group or over-age -5 group.  It was a friendly competition, which Pastor Bryant referred to as “Black Lives Matter” vs. “Civil Rights.”  The over-45 group won the challenge, although the younger group was diligent and creative about fulfilling the task, church officials said.

The DeKalb Sheriff’s Office and private bus companies are assisting New Birth in transporting individuals and families from Gateway, My Sister’s House, Salvation Army, Evolution Center and other local shelters.

The homeless community will be a part of the 9:30 a.m. worship service, which will feature praise and worship led by gospel artist Jonathan Nelson, and a riveting message by Pastor Bryant.  During the service, football teams from Cedar Grove,  Redan and Lithonia high schools will be celebrated and honored.

After the service, the Super Bowl celebration for the homeless community begins at the Bishop Eddie L. Long Family Life Center.  The party will feature a menu crafted by Executive Chef Donald Wilson and Chef Yachecia Holston, a finalist in the top 5 of season 8 of “Master Chef.” Comedian/actor Palmer Williams, Jr. of Love Thy Neighbor and House of Payne, viewed weekly on the OWN Network, will serve as the host with performances by artists Silento, who sings the popular dance song, “Watch Me;” Crissy Collins of Beyonce’s background vocalist group, The Mamas, and Y’Anna Crawley, winner of season 2 on Sunday Best, among others.

New Birth’s own praise team, Kingdom Sound, and Tiffany Boone also will be on stage, as well as Sharon Woodruff, a singer from the Civil Rights era known around the globe.  Pastor Owen Wallace, Martha Wallace, Gary Howard, and LaDonne Howard of Vision 105.1 will broadcast the party live from New Birth.

Guests will be treated to complimentary haircuts and hairstyling by the staff of TAG Concept Salon, Salon D’Vine and other barber and beauty shops.  Free health screenings, clothing and employment information also will be provided.

Hosting homeless guests is a regular occurrence for New Birth.  Every month, New Birth buses go to downtown Atlanta and transport men, women, and children from shelters to the church. After the worship service, they receive hot soul food lunches, clothes, and free haircuts and hairstyles.  Showers are also available. New Birth also delivers food and holds worship services to the Safe House, an Atlanta day shelter, on a regular basis.