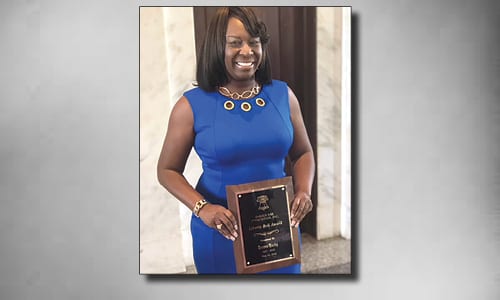 Teresa Hardy, president of the DeKalb NAACP, received the Liberty Bell Award from the DeKalb Bar Association on May 10. The award honors a non-attorney citizen who has made a difference in the DeKalb County community.

Hardy was honored for her leadership and dedication to fighting for civil and human rights. Hardy succeeded John Evans after he retired as president of the DeKalb NAACP in 2016. She has served with the civil rights group for more than 13 years.

DeKalb State Court Judge Dax E. Lopez presented the award to Hardy during a luncheon that was held in celebration of Law Day. The event was held at the historic Decatur Courthouse.

“I was blessed to have my family and friends support me.  It made my day that Judge Lopez presented this award to me. Also great to have Judge Jacobs, Judge Boulee, and Judge Brian K. Ross present to support me.”

Hardy said she felt humbled by the honor and thanked the members of the DeKalb Bar Association for recognizing her work.

Founded in 1964, the DeKalb Bar Association (DBA) is comprised of lawyers, judges, paralegals, elected officials, students and others in the legal profession.