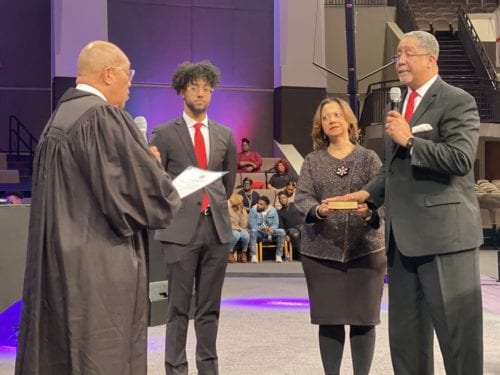 Stonecrest’s visionary and founder, Jason Lary, was sworn in for his second term as mayor tonight (Jan. 7) during a ceremony at New Birth Missionary Baptist Church. Lary took the helm, turning the city’s pages of history again, as the mayor of DeKalb County’s largest city, boasting 54,300 residents.

Lary spent four years pushing for the incorporation of the municipality, which was approved by voter referendum in 2016.

“Stonecrest will be the most recognized city of commerce, production and jobs , collaboration, partnerships and economic growth the nation will ever see from a newly-created city. Period.,” Lary told the audience following the swearing-in.  “We are the largest city created since Reconstruction—the largest city created since after slavery with 97 percent African Americans. That is something alone that we should be proud of.”

Lary was joined in the pulpit for the ceremony by his wife, Debbie, and their youngest son, James. Their eldest son, Jason, Jr. was unable to attend due to his job in South Florida but was “watching” online via Facebook live, Lary said.