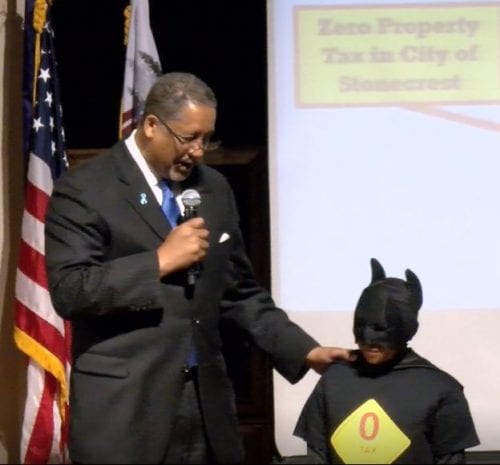 Pictured is Jaymeon Render, 8, who nearly stole the show at Stonecrest Mayor Jason Lary’s State of the City Address on May 6, 2019. The Barack Obama Elementary School student, who was dressed as a superhero the mayor called “Zero Tax Boy.” The young Render responded “no” to every question the mayor asked. The audience erupted into laughter at the child’s response.

At his State of the City Address on May 6 at New Birth Missionary Baptist Church, Stonecrest Mayor Jason Lary told citizens the city is fiscally on track, completing 2018 with a surplus in excess of $800,000 in its operating budget. The mayor said the city’s 2019 operating budget of $9.3 million includes a planned surplus of $500,000 as Stonecrest starts its Public Works operations and expands its Parks and Recreation Department to buy nine parks from DeKalb County government that are located within the city limits.

Lary also brought good news to parents who said they were upset that they had no input in the city’s plans to bring in a new vendor to run Browns Mill Recreation Center’s summer camp program. Lary said he worked with senior officials of DeKalb to keep the staff in tact this year, rather than bring on a new vendor.

“We finished up some meetings in DeKalb with regard to keeping those employees in place, having no disruption in service, having no disruption with parents and being able to work through this situation so that everybody was satisfied with what needs to happen. That is collaboration. That’s partnership. That’s vision,” the mayor said.

And Lary brought humor to his address. The mayor did a little role playing with 8-year-old Jaymeon Render, who was dressed as a super hero he called “Zero Tax Boy.” Render dashed onto the stage and stood next to the mayor and had the following exchange:

Mayor: Hello, Zero Tax Boy. Are you going to raise my taxes?

Mayor: Are you sure?

The audience bursts into laughter.

The mayor said he plans to continue to make good on his promise that residents would face no new taxes as a result of the city’s formation.

Other highlights of the mayor’s speech included touting that the city had issued 635 building permits (residential and commercial) and collected $1,355,517 in permit fees to date. He also touted the city’s track record of staying on top of code violations, with officers investigating 4,385 code violations as of 2018.

Lary said the city would begin repaving some of the city’s worst roads in a few weeks, utilizing special purpose local option sales tax dollars (SPLOST) and state funding from the Georgia Department of Transportation’s Local Maintenance Improvement Grant (LMIG). The LMIG is given to cities and counties based on population. Stonecrest, which has about 54,000 residents, must contribute matching funds of at least 30 percent. The LMIG funds are awarded annually through the DOT.

Lary said residents should expect to see signs going up in the areas where the work will begin.

Lary said the city is marching forward to build the city’s reputation as a world-class place residents will be proud of and one that will attract visitors. He said he has reached out to Denny’s restaurant on Panola Drive to provide customer service training to the restaurant’s employees. The restaurant recently came under fire after receiving an F on a recent health inspection and employees attacked and cursed at television reporters who were on the scene to cover the story. Social media lit up with negative comments about the restaurant workers’ reactions after Channel 46 ran the story.

Lary said it is his goal to work with Denny’s to earn a “Best of Stonecrest” seal under a new initiative the city is launching. The city is working with Discover DeKalb to provide free customer service training to city merchants  who would then earn the seal and the city would help to promote those businesses as a way of building economic development.

Lary also discussed repurposing the former Sears automotive building at the Mall at Stonecrest for a new headquarters to house the DeKalb East Precinct. He said the new Police Department would provide greater visibility and quicker response time for citizens.

Brenda Cornelius served as moderator of the program. Cornelius is a member of New Birth who served on the Stonecrest Alliance, which worked on the formation of the city.

New Birth’s pastor, Dr. Jamal Bryant, welcomed attendees to the address. DeKalb CEO Michael Thurmond also welcomed the audience and made remarks, along with State Rep. Vernon Jones, who gave a historical perspective of events that have transpired concerning the new city. The mayor was introduced by his wife, Debra Lary, who said she has been energized at how Stonecrest citizens have taken a stand at City Council meetings, championed change in the community.

The video of the State of the City address may be viewed at www.oc