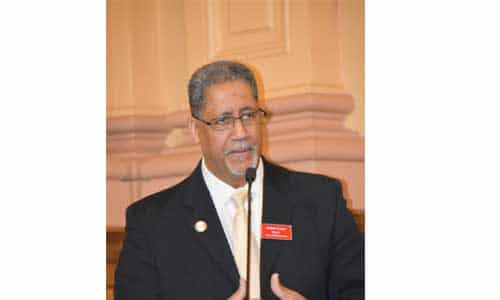 Stonecrest Mayor Jason Lary spoke to legislators and the public at the Georgia Capitol on Feb. 27 in support of legislation to expand opportunities for minority-owned businesses and level the playing field with state contractors.

Under the House Bill 90, minority-owned business would receive a fair share of the $26 billion awarded to state contractors, according to State Rep. Winfred Dukes, one of the bill’s sponsors. State Rep. Billy Mitchell, who represents District 88 which includes Stone Mountain, along with four others co-sponsored the bill.

If passed, the bill will provide for a feasibility study that would identify disparities in all state government departments.  HB 90 would create a Division of Supplier Diversity that would reinforce an ongoing process to ensure that state contracts are equitably distributed, according to Dukes.  The bill also clarifies and defines a minority business as those with at least 70 percent ownership by one or more minority groups.

Lary was one of several invited guest speakers to address lawmakers and the public in support of the bill. The mayor committed to continue hiring contractors for the city who are black or minority-owned.

HB 90 has support from the House of Representatives and the Senate.  If passed, the bill would become effective later this year.