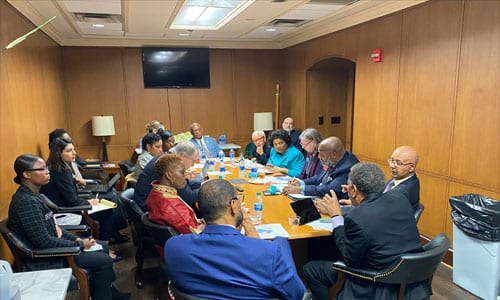 The city of Stonecrest has dismissed its lawsuit to determine if  Councilwoman Jazzmin Cobble should forfeit her elected seat on the council, due to absences, based on the city’s charter.

Attorneys Emily Macheski-Preston and Thompson Kurrie filed a notice to dismiss the case without prejudice on behalf of the city and Mayor Jason Lary on Tuesday(Feb. 18), bringing a close to the civil action case (No 20CV2341).

The dismissal follows DeKalb Superior Court Judge Mark Anthony Scott’s ruling on Feb. 14, denying the city’s request to seeka temporary restraining order against Cobble until a declaratory judgment seeking clarity on the city’s charter could be determined. In making his decision to allow Cobble to keep her seat on the council, however, Scott said he was not “hung up on due process issues.” He said the city had until Tuesday to request a reconsideration of his decision. The city, however, requested dismissal of the case.

“I don’t think anyone really knew how to go about requesting an excused absence. In this political climate that we exist in, I think that it’s been made clear across America that you just don’t remove people from office by vote of the body,” Scott had said during the court hearing.

Cobble said in an email on Wednesday(Feb. 19) regarding the city’s dismissal of the case: “I am glad we can now focus on the work of the people and avoid further litigation on these issues. We need to be about doing the important work of the City and not fighting among ourselves.”

Cobble’s attorney, Bryan Tyson, said: “There is no danger that the City’s actions are called into question. Georgia law makes clear that an officeholder does not forfeit his or her office without the intervention of a court and that all acts while holding that office ‘are valid as the acts of an officer de facto.’ That language is from a Georgia Court of Appeals decision in 2018, finding that a school board seat in Taylor County was not made vacant automatically without a court’s intervention. Georgia law ensures that all actions of the City remain valid unless there is a Court order to the contrary.”

Cobble’s absences came to light last month after two citizens, through Georgia’s open records laws, requested the 2019 attendance records for all of the City Councilmembers. Cobble missed City Council meetings on Sept. 23 and Oct. 14 due to her outside full-time job, city officials said. The absences were never excused in the form of a vote from the City Council. Some members said during a special called meeting on Feb. 10, however, that they believed since Cobble notified the city clerk of her absences, the notifications were sufficient. The charter states in Section 2.03 (a) that a council person forfeits his or her office by “failing to attend one-third of the regular meetings of the council in a three-month period without being excused by the council. “

Lary said the city had a responsibility to seek clarity from the court on the matter.

“I did not seek to remove her (Cobble) from her seat. We sought to find out the answer to the charter of her missing days, which is still unanswered,” said Lary. “As mayor and the leader of the city of Stonecrest, I have to handle pleasant and unpleasant situations. I had no choice but to seek a remedy for a person that committed multiple absences highlighted by citizens’ requests. It is my responsibility and oath of office to remedy all situations for the city of Stonecrest.It is not personal. It is a function of the job.”

The proposed amendment to Section 2.03 of the charter revising paragraph of the subsection (a) as follows:

(3) failing to attend one-third of the regular meetings of the council in a three-month period without being excused by the council; provided, however, the absences due to the following shall automatically be excused:

(A) A personal accident, emergency, illness, or injury;

(B) An accident, emergency, illness, or injury of an immediate family member, or

( C) Obligations arising from the elected officials outside full-time employment.

A councilmember unable to attend a meeting due to one or more of the circumstances provided in subparagraphs (A), (B), or (C) of this paragraph shall provide written, electronic, or telephone notice to the city clerk before the beginning of the meeting, and the city clerk shall notify the remaining councilmembers of the councilmember’s excused absence.”

“These are our suggestions—the delegation—in terms of a solution,” said Jones.

State Sen. Steve Henson, who attended the meeting,  said rather than force someone to give up their elected seat, the City Council could consider other measures to address councilmembers’ absences. Henson suggested that notices could run in the newspaper notifying the public of a councilmember’s absences, restricting councilmembers’  payments based on meetings attended or having them lose assignments on appointed committees.

State Rep. Vernon Jones said the House is working on legislation to clarify the portion of the charter dealing with excused absences and the process that should take place. Sen. Jones interrupted Rep. Vernon Jones from questioning the council members, saying he was not a part of the Senate delegation. The two had a heated exchange after the senator refused to recognize Rep. Vernon Jones as a sitting lawmaker, saying the representative’s comments were that of a “citizen.” Rep. Vernon Jones criticized Sen. Jones for barring Mayor Lary from the meeting. He walked out of the meeting.