The statutorily-mandated training equipped the students with the knowledge of how development authorities serve within the city’s economic development process.  Training topics included ethics, conflicts of interest, bonds, incentives, strategic planning, and finance. 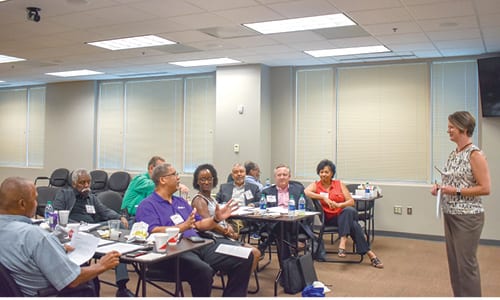 The members toured Smyrna and Suwannee to collect information on the two cities’ developments.  In a briefing, Stoner explained how Smyrna redeveloped its city.  He described the process of building and financing a city business center, upscale housing, streetscapes, and mixed-use developments.  Stoner and Mayor Lary agreed that the governing bodies, which include the city council, planning commission, and the board of zoning appeals, must have a common economic vision and goal.

“We cannot let negative comments made at our public meetings or on social media sway us from voting and supporting development that accomplishes our goals,”  Lary said.

The Development Authority must set its by-laws, elect officers and set regular meetings before beginning itswork.  A meeting to begin this process will be set within the next week, Lary said.