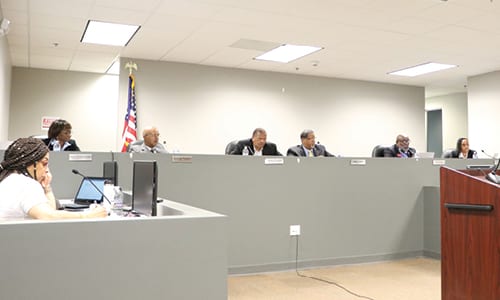 A proposal to award a $3.8 million contract to Grice Consulting, Inc. to manage the city of Stonecrest’s SPLOST program has died—for the second time in two months.

The Stonecrest City Council deadlocked 3-3 on the proposal during a tense special called meeting on May 3. In April, the council also could not reach an agreement, deadlocking 3-3 on the matter.

The council has been bickering over who should manage the SPLOST program since the council initially approved an agreement with Grice last September. The 6-year, $47 million SPLOST program is slated to fund several infrastructure and capitol improvement projects including road repairs, developing a master plan for parks and recreation, and the construction of a public safety building for police and City Hall.

The tension between council members played out on May 2 at a special called meeting, which had to be cancelled because the council did not have a quorum of four to vote on the matter. The meeting was rescheduled for May 3. Although the entire council and mayor showed up for the second meeting, they still could not reach an agreement on the contract.

Council members Jazmin Cobble, who made a proposal to modify the contract by eliminating parks and recreation and capitol improvement from the work Grice would oversee, raised her hand in favor, along with George Turner and Rob Turner. Mayor Jason Lary, Jimmy Clanton and Diane Adoma cast the dissenting votes.  Adoma said she asked to defer the matter because she wanted to have City Attorney Tom Kurrie present to answer questions about the proposed contract. Clanton concurred, saying “I think it would be a disservice to the public, to the people of Stonecrest, to move forward and to jam something down folks’ throat when we don’t have proper legal advisement.”

Kurrie was absent from the May 3 meeting. Attorney Serena Nowell, who was filling in for Kurrie, told the council she did not feel qualified to answer questions concerning the agreement with Grice because she had not been involved with previous negotiations and had not reviewed the contract. She said she felt that she could provide direction from a “procedural standpoint.”

Kurrie has said the city signed an initial agreement with Grice Consulting on Aug. 1.  Friction began shortly after that. Lary said the city received an initial invoice for $56,840, 10 days after the City Council approved the agreement with Grice.  Grice sent a second invoice of $14,840 on Oct. 1, 2017. The mayor said Grice billed the city a total of $162,000 through November 2017, including $20,000 for handling SPLOST community meetings.

Lary called the requested amounts for the pre-SPLOST work “outrageous.” He said although Grice came highly recommended, he did not do that much work to warrant those kinds of payments and he did not wish to continue to work with the company.

“If you can’t paint the back porch, don’t expect for me to let you paint the house,” Lary said. “We had an opportunity to work with this specific vendor with pre-SPLOST and it showed me everything I needed to know by working with that particular vendor. I don’t care whose feelings it hurts, I don’t care what political alliances you have: My job is to take care of Stonecrest first.”

next‘Kings of Halftime’ to march in Macy's Thanksgiving Day Parade