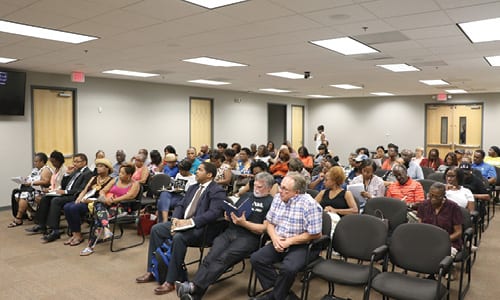 Mayor Jason Lary and the City Council held a special call meeting on Aug. 15 to vote on resolutions that would give the city clerk authorization to publicize proposed ordinances that would amend the city charter.

Normally, an ordinance is read twice and then voted on by the council. Resolutions aren’t usually necessary. Because these proposed ordinances involve changes to the city charter, however, the city clerk must publicize each amended ordinance three times during a 60-day period, said Adrion Bell, the city’s Communications Director.  After the 60 days, the council can hold public meetings and then vote on each of the ordinances.

Lary said the special call meeting was not held to vote on the specific ordinances.

“It was a procedural meeting in which we voted on resolutions to simply allow the clerk to publicize the information so that we can officially receive public input,” said Lary.  “There is a difference between an ordinance and a resolution. These were resolutions.”

Resolutions were passed for the following ordinances:

• An ordinance amending the charter to eliminate the employment restrictions for the mayor and council.

“Your millage rate is still at zero and you do not have any tax increases,” Lary said.

This proposed millage rate cap would allow the county to transfer to Stonecrest the current tax revenue for services being paid by the city’s businesses and residents to DeKalb County,  Lary said.

“This could also mean a reduction in the rate that you pay the county if we find that Stonecrest can provide the services for less than DeKalb,” the mayor added.

The resolution to publicize an ordinance amending the mayor’s salary and the expense allowances of the mayor and council failed by a 4-to-2 vote.  The mayor offered a substitute motion to change the wording of the ordinance so that it removes the mayor’s salary portion and focuses solely on the expense allowances.  The substitute motion failed by a 3-to-3 vote.   “It was my intent to give each citizen their say on each of these items,” said Lary.  “I am disappointed that we couldn’t come to a simple decision to allow the constituents to have their say on these matters.  When I realized that the mayor’s salary was an issue, I removed it and we still couldn’t agree to let the public speak on the remaining part of the ordinance.“