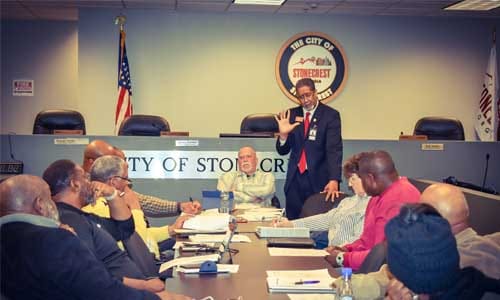 The Stonecrest City Council is scheduled to vote on the city’s controversial SPLOST management contact on Monday, Feb. 25, 7 p.m.

The upcoming vote follows the council’s 4-2 approval on Feb. 11 to award a $3.3 million contract to Grice Consulting Group, LLC. That decision follows infighting among council members that has persisted for more than a year and a half after city officials questioned invoices ($162,000 worth) that Grice submitted for pre-SPLOST work. The city settled and paid Grice $40,000.

With the council’s recent vote to move ahead, council members instructed city attorneys to have drafts of the contract ready by Feb. 18, ahead of the scheduled council meeting.

Stonecrest Mayor Jason Lary has opposed the measure, saying the council cannot legally award a “sole source” contract.  Councilman Jimmy Clanton has supported the mayor in his efforts to have the contract go out for bid.

Lary addressed concerns about the process of awarding contracts at the Citizens’ SPLOST Oversight Committee meeting on Feb. 19.

Council members have bickered over whether or not Grice had an “enforceable” contract at the time the council agreed to retain him on Aug. 21, 2017 to perform the pre-SPLOST work.