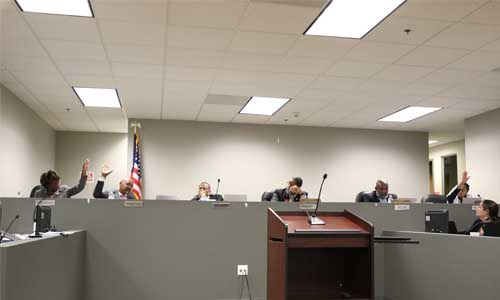 The Stonecrest City Council may have set a record for holding its longest council meeting yet—7 hours. The council meeting started at 6 p.m. on Monday and ended a little past 1 a.m. today.

The council deadlocked 3 to 3 on several issues, including:

Rezoning a 16.79-acre tract at 1882 Coffee Road from M (light industrial) to heavy industrial (M-2). Several questions were raised by the public as to whether the proposed site would be used for industry that might create environmental waste and pollutants after Attorney Bernard Knight said his clients did not yet know how the site would be used. Knight said his clients was seeking the rezoning namely for uniformity with other tracts they own in the industrial park.

The council also deadlocked on awarding a multi-million dollar contract to Grice Consulting for the management of the city’s SPLOST program.

Mayor Jason Lary urged the council to consider other options after explaining that Grice Consulting invoiced the city for large sums of money immediately after being brought on board in August 2017.

Lary said the city received the first invoice of $56,840, just 10 days after the City Council voted for the firm. The second invoice of $14,840 was received on Oct. 1, 2017. The mayor said Grice billed the city a total of $162,000 through November 2017, including $20,000 for handling SPLOST public meetings. He said John Funny, who is CEO of Grice Consulting, provided no details for the scope of work or evidence of deliverables.

“I want you to tell me: What did (he) do for my entire year’s salary?” Lary said referring to the $20,000 bill related to the SPLOST public meetings. “Citizens, It’s my job and council’s job to take care of your money.”

More to come on the story.