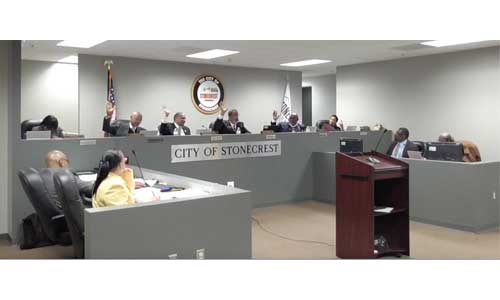 The city of Stonecrest took a significant step on Jan. 28 toward getting the city’s potholes repaired. The City Council gave city staff the green light to move forward with a digital analysis of the city’s 283-mile roadways.

City staffers have received bids for the project and estimate the cost will be $71,000 for the analysis, which will report the condition of the roads, prioritizing them from worst to best.  The road analysis will also give the city an assessment of the number of street lights needed to help alleviate the city’s dark areas.

“Citizens should see work begin around the end of April or beginning of May when the weather warms up,” said Mayor Jason Lary.

Before the City Council voted on authorizing the road analysis, Lary encouraged the council to change their positions and grow in their roles as public servants as they continue to make Stonecrest the best city possible.  In the past, the majority of the council voted against conducting its own road analysis instead supporting using data provided by DeKalb County government.

“You should change your position, if it helps your neighbors and those who need help,” Lary said.

Recently, the mayor held a town hall meeting called “Straight Talk with Mayor Lary” in which residents expressed concerns and frustrations about the city’s potholes.

“Salem Road is an imminent danger,” Tammy Grimes told a packed house at the Jan. 22 Straight Talk.  “I don’t have an expendable child and I would hate for our city to be on the news because we have not moved fast enough.”

Lary agreed, vowing to get the roads fixed.

“The provisions of this analysis move us right into our public safety with the proper lighting of our streets, which will allow us to install safety cameras.  It moves us toward ensuring safe entrances and exits to our parks. It moves us toward our city of innovation and excellence in technology,” Lary said.

“This is not only a pavement analysis, but it is also a budget tool.  The road analysis company will be able to rate the damage on your streets and identify the most cost-effective way to spend your repair dollars,” Hildebrandt said.

Councilwoman Diane Adoma, however, did not support moving forward with the road analysis.  During the City Council meeting, Adoma questioned whether the city should wait to complete an intergovernmental agreement(IGA) with the county.

“I think the first steps should be to get our IGA, then do the road analysis and pave like mad and get rid of the potholes,” Adoma said.  “I may be out of my lane, but I need for you all to help me understand why we wouldn’t get the contract in place with the county,” she added.

Hildebrandt responded that warm weather is needed for successful road pavement. He said the city could miss the 2019 paving season, if it waited for the IGA with the county.

“You can write off 2019 and you will probably be looking at Spring 2020,” Hildebrandt said.  He further explained that the county would not pave the city’s roads. Instead, they would only patch the roads.  Road paving, he explained, is a capital improvement that must be done by the city.

Recently, Stonecrest received funds from a Local Maintenance Improvement Grant (LMIG) that will give the city money toward road improvements.  The grant will be given to the city annually.  The city must match 40 percent of the state grant with Special Purpose Local Option Sales Tax (SPOST) or general funds.  This year, the city’s LMIG and matching funds will total $1.2 million.

“I am not willing to wait another day on IGAs or politics,” the mayor said. “None of that is necessary.  I promised the citizens that we would move as soon as possible because this is now a safety issue.  It’s simple.  We have the money in the bank and the talent on staff to get it done.  It’s no use in waiting.  It’s no use in putting our citizens’ safety at risk.  We are a city of action and I took action,” Lary added.