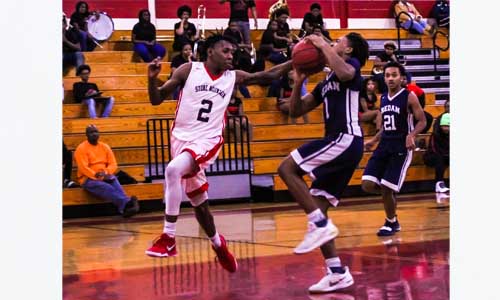 The Stone Mountain Pirates finished off a girls/boys home sweep in Region 5-3A basketball action with a 73-62 win in the nightcap against the Redan Raiders on Friday, Jan. 11.
Redan cut a 12-point (38-26) Pirates lead to seven (52-45) heading into the fourth quarter when the Pirates went on an 11-2 run to extend the lead to 16 (63-47) with 3:54 to play in the game.
Jevon Rubin got the Pirates rolling with a three-pointer from the right corner to make it 55-45. Bryson Dennis then sandwiched Stone Mountain’s Dee Richardson’s layup with four consecutive free throws before Samari Moore and Jacorrie Knowlton hit layups to extend the lead to 16.
Rubin put the game away with 2:45 to play as Dennis drove the lane and threw a leaping behind the back pass to his wide-open teammate in the left corner for another big three-pointer that made it a 68-51 Pirate advantage.
Richardson hit a pair of layups for the Raiders, but Dennis countered with four more free throws as Stone Mountain held on to a 73-59 lead.
Jordan Davis hit a three-pointer in the final seconds to pull Redan within the final margin of 73-62.
The Pirates (13-7, 4-3) led by as much as 11 in the first half as Moore’s three-point play with 1:28 remaining before half gave Stone Mountain its first double digit lead of the game at 31-20.
Siah Gray had a pair of free throws and followed up with a layup at the buzzer to pull the Raiders (8-10, 4-3) with 33-25 at the half.
Dennis led all scorers with 17 points in the game followed by teammates Rubin with 16 and Jacorrie Knowlton with 13.
The Raiders were led by Richardson’s 13 points while Xavier Worth and Siah Gray hit for 11 points each in the game.
The two teams are tied for third in the Region 5-3A standings at 4-3 behind leader Cedar Grove at 6-1 and Pace Academy at 4-2.
(G) Stone Mountain 72, Redan 32
Five Stone Mountain Lady Pirates scored in double figures as they rolled to a 72-32 Region 5-3A win at home over the Redan Lady Raiders on Friday.
Jada Price got the Lady Pirates (9-10, 5-2) rolling with a pair of three-pointers in the first two minutes of the game as Stone Mountain jumped out to a quick 10-0 lead.
Mary Sousa closed out the first quarter with a layup as Stone Mountain led 18-5 heading into the second period of play.
Price opened the second quarter just like the first by hitting another three-pointer and Rakael Johnson’s layup with 5:06 left in the half extended the lead to 20 (25-5).
Daisha Twiggs ended the 9-0 run for Stone Mountain as she got Redan on the board in the second quarter with a three-pointer only to have the Lady Pirates put together a 14-0 run that ended at the 1:29 mark of the half on Ceniah Flood’s three-point play to make it 39-8.
Price hit a layup with six second left in the half to give Stone Mountain a 41-10 lead.
Johnson would score 10 of her 21 points in the third quarter as Stone Mountain pulled farther away at 57-21 as the third quarter came to an end.
Johnson’s 21 points led all scorers and she was joined in double figures by teammates Jardyn Alexander with 16, Ceniah Flood and Mary Sousa with 10 each and Jada Price with 11.
Daisha Twiggs finished with 14 points to lead Redan (3-9, 2-5).

previousBright from the Start seeks facilities for food program