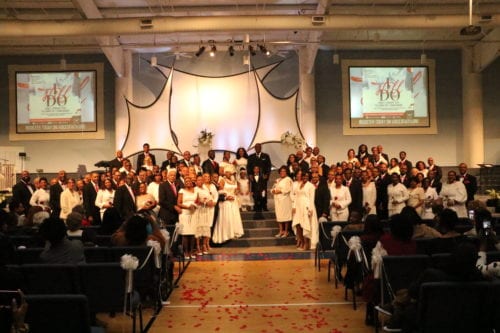 STONE MOUNTAIN – Love filled the air as 60 couples renewed their vows in a mass wedding ceremony, “I Still Do,” at Voices of Faith Ministries on Sunday, Feb. 16.

Two generations of the same family were among those who tied the knot again: Raymond and Jessica Johnson, married for 40 years, renewed their vows. So did their daughter, Regina, and son-in-law Delwin Wright, married for two years. Son, Raymond Johnson, Jr. and daughter-in-law, Joi, married for 18 years, also renewed their vows. The family of six, who were lined up behind one another, smiled as they made their way down the aisle. 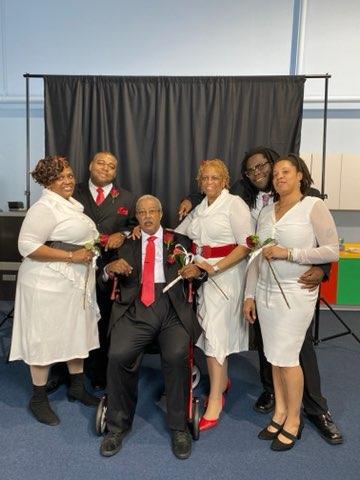 Their son, Garrison Hawkins, 6, served as ring bearer, and Kellie Brown, 6, the daughter of Kareen and Dwight Brown, served as the flower girl.

The mass vow renewal ceremony, which was held following the church’s 11:30 a.m. worship service, was a first for Voices of Faith, said Bishop Hawkins, who officiated the ceremony.

“The wedding and marriage ministry came together and produced a masterpiece. It was beautiful,” said Bishop Hawkins. “Renewing marriage vows reminds the couple that marriage is not just love, but commitment and action. By renewing, you’re saying to your mate that I’m in it for the long haul.”

“The celebration included couples from our Stone Mountain and Conyers campuses, as well as couples who are not members of the congregation,” said Ware, who served as the director of the mass ceremony.

Ware said all of the brides received a rose while the men received a boutonniere. Each couple also received a framed photograph of themselves, a certificate of their renewal vow, a special CD from Bishop Hawkins and a dessert reception with cupcakes and a wedding cake for them and their guests.

Jessica Johnson said the day was as sweet as the cake and cookies. She said her husband shed tears of joy because he was so moved by the celebration.

“It was really special for me and my family. I asked my daughter and son to renew their wedding vows with their spouses. I bought my daughter a dress just like mine to wear for the celebration,” Johnson said. “I was praising God and thanking Him for everything that He has done.”