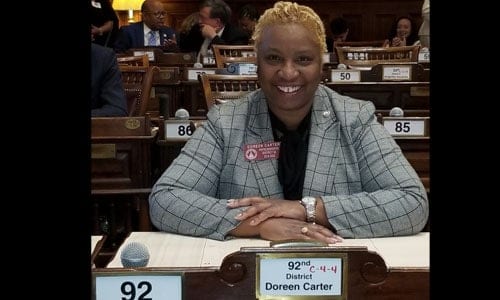 “Heart disease is truly the silent killer… I am grateful to be alive to share my story.”—State Rep. Doreen Carter

ATLANTA – State Rep. Doreen Carter, District 92, is encouraging men and women to “Go Red for Women” by wearing something red on Friday, Feb. 7.

Carter, whose district includesportions of Rockdale and DeKalb counties, will host a “Go Red for Women” rally at 11:45 a.m. at the South Wing steps of the Georgia Capitol in downtown Atlanta.

“Go Red for Women” Day is celebrated by the American Heart Association (AHA) and is designated to increase women’s awareness and research about cardiovascular health.

“Education and awareness can aid in the fight against heart disease, and we need your help in order to create change within women’s health,” said Carter. “My grandmother died of a massive heart attack, and my mother died in her sleep. I was fortunate to make it to the hospital in time for the doctors to stop the attack on my heart.  However, it was discovered that I had a 100 percent blockage. Heart disease is truly the silent killer. I had no idea that I was having a heart attack, but I am committed to sharing what I have learned in hopes of helping someone else survive like I did. I am grateful to be alive to share my story.”

In addition to wearing red on Feb. 7, Carter also is urging citizens to make a donation to Go Red for Women in remembrance of families to those who have died of heart attacks or strokes.  Through “Go Red for Women” Day, she also aims to remind women to schedule well-woman visits, prevention check-ups to review overall health and blood pressure, check cholesterol and look for signs of heart disease, stroke and other illnesses.

“Heart disease is the leading cause of death for African American and white women in the U.S., and the CDC has reported that one in every five women’s death is attributed to heart disease,” said Carter. “Fortunately, we can change that because 80 percent of cardiac and stroke events may be prevented with education, healthy eating habits and regular exercise.”

According to the Centers for Disease Control (CDC), 6.1 percent of white women, 6.5 percent of black women and 6 percent of Mexican women who are more than 20 years old have coronary heart disease.

To learn more about the AHA’s “Go Red for Women” movement, click here.