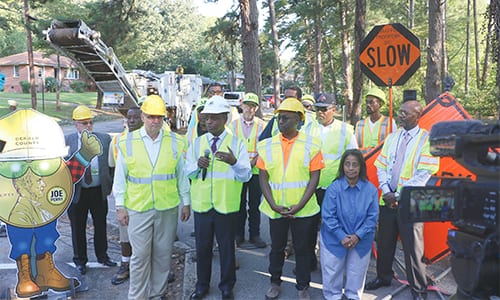 The county has begun repaving the first of more than 300 miles of the worst streets and roads with funding generated from SPLOST, which was overwhelmingly approved by voters in November 2017.

“I want to thank the voters, who entrusted their government to responsibly use their tax dollars to improve infrastructure throughout the county,” DeKalb CEO Michael Thurmond said during a Sept 20 news conference. “Today, we are fulfilling our promise to resurface county streets, and there is much more to come.”

The county kicked off the first project of the $9.48 million initial SPLOST paving contract by repairing one of DeKalb’s badly deteriorated roads, West Lakeside Drive in South DeKalb. Contractor crews will use approximately 400 tons of material to mill the road, patch, and resurface, resulting in a smooth and safe street.

“District 3 folks just want to thank you for picking us first,” said Johnson, acknowledging that West Lake Drive is in the community where two police officers lost their lives in January 2008. The lake, he said, honors DeKalb Police Officers Eric Barker, 33, and Ricky Bryant, Jr.,26, who were ambushed and shot to death while they were working as security guards at a high crime apartment complex. Both police officers were married and both had four children.

Johnson said he is excited about the county’s plans to fix its potholes and repair a number of roads with the SPLOST funding.

“I remember there was a time when we only had money to do 20 miles per year and we would have to tell residents ‘We only have enough to do 20,’ but we had 400 miles of needs. Now, with this process—with this penny (from SPLOST), you’re going to help us pave almost 300,” Johnson told Thurmond at the news conference. “…This is just a down payment from our voters.”

DeKalb’s Board of Commissioner’s presiding officer Jeff Rader said the SPLOST funding gives the county “a great opportunity now to make up for lost time.”

The Board of Commissioners approved the initial paving contract on July 24, using SPLOST and the Georgia Department of Transportation Local Maintenance and Improvement Grant.

Expected to be in service by the end of September, each 2018 Chevrolet Tahoe costs approximately $61,000 and will be used as officer take-home vehicles to increase community visibility and reduce crime. Additionally, the new patrol vehicles feature push bumpers, which allows officers to remove disabled vehicles from roadways to expedite traffic flow.

The county will purchase an additional 50 patrol vehicles  in 2018.