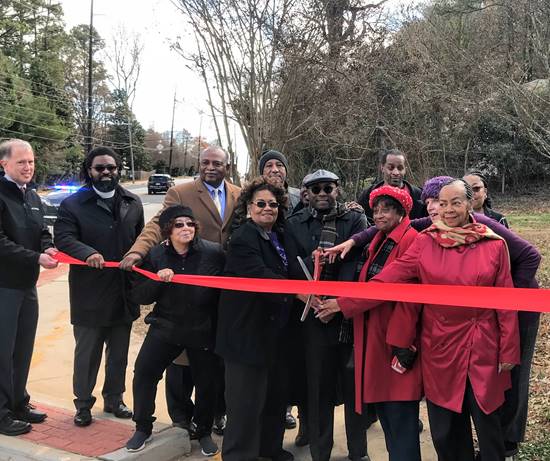 DeKalb County Commissioner Larry Johnson, along with many committed residents, celebrated the completion of the second phase of the Glenwood Road sidewalk project on Dec. 2. Officials and members of the community held a ribbon cutting ceremony to commemorate the project, which began in 2007, and includes a third phase.

“This is a milestone. This has been a long time coming,” said Johnson.

Ann Brown, who has been a longtime advocate and champion in South DeKalb, said she was proud to be a part of the milestone. Brown became involved in lobbying for Glenwood Road sidewalks after a young cousin was killed on the road.

“I am happy to see this day come, where we are able to walk up and down Glenwood and not be concerned about our safety due to no sidewalks,” Brown said. “Thank you, Commissioner Johnson, for helping lead us to victory today.”

According to the Atlanta Regional Commission, Glenwood Road, with approximately 18,000 vehicles per day, is traditionally one of the top three corridors in DeKalb for pedestrian-related crashes and fatalities.

Johnson said the first phase of the project—from I‐20 to Candler Road—was  completed in 2010 and included installed sidewalks and improved pedestrian crossings. The total cost of the project for the first two phases is $11.6 million.

The third phase will include improvements along Columbia Drive to Covington Highway.

“The wait is over, and this is how we do it in District 3.  It doesn’t always happen overnight everything is a process, but we get it done!” Johnson said.