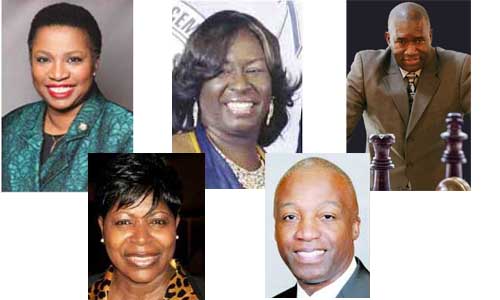 By the time people got home from work on the East Coast, the documentary, “When They See Us,” had shot to No. 1 and it stayed there all night, said Director Ava DuVernay.

The four-part trending Netflixseries has sparked renewed demands for criminal justice reform locally and throughout the country. The documentary re-enacts the lives of five boys ages 14 to 16 who became known as the Central Park Five, after they were wrongfully convicted of the rape of a white jogger in New York City in 1989. All five were exonerated on Dec. 19, 2002 after Matias Reyes, a convicted murderer and rapist, admitted that he alone was responsible for the attack as well as another rape near Central Park days earlier, according to The Innocence Project.

State Rep. Doreen Carter, whose District 92 includes parts of DeKalb County and Rockdale County, said she was extremely disturbed by the film, which she says must serve as a wake-up call for parents.

“I have three sons of my own and I have had to have another whole conversation about how they should interact with the police,” Carter said. “Seeing how those boys were coerced into making untrue statements under the guise that they would be allowed to go home if they cooperated, we have to tell our children to keep their mouths closed and do not admit to anything that they have not done.”

Carter said corrupt law enforcement and those in the judicial system also should be held accountable for their actions.

Four of the teens in the Central Park Five case—Kevin Richardson, Yusef Salaam, Antron McCray and Raymond Santana—spent between 5 to 10 years incarcerated. Korey Wise, the only one tried as an adult, served 12 years in prison.

The Innocence Project, a non-profit organization that exonerates people who are wrongfully convicted through DNA testing, helped the men to receive compensation for time served. The men received a $41 million settlement from the City of New York in 2014—30 years after their conviction.

Kee Strane, a Conyers business owner who has two sons, ages 14 and 20, said there is no amount of money that can replace what the men lost as children.

“As soon as I heard what it was about, I couldn’t stand to watch it. I know they suffered a lot and it’s really sad that they missed so much of their lives.

Teresa Hardy, president of the DeKalb branch of the NAACP, said the movie was difficult to watch but it “had to happen.”

“The scariest part of the movie was when the boys were taken in for questioning and didn’t have a clue as to what their first right was as a citizen: You have a right to remain silent and rights to a lawyer and attorney,” said Hardy. “The fact that they weren’t knowledgeable means we have work to do. We must transform our community by educating our youth and ourselves on issues like these.”

Orrin Hudson, motivational speaker and founder of Be Someone, a DeKalb County-based mentoring program, said the judicial system must be overhauled.

“I think that black males have caught hell in the judicial system. For many years, the black man has been executed in the courtroom. This whole idea of just locking up any black male—even if there is no evidence—has to stop,” said Hudson. “It’s the people who sit on the sidelines and allow things to happen is why we end up with cases like this.

Santana, McCray and Salaam, who now live in Georgia, as well as Richardson, who lives in New Jersey, and Wise, who remains in New York, all continue to fight injustice.

In fact, over this year’s Father’s Day weekend, Salaam, partnered with rapper and activist T.I and the Rev. Raphael G. Warnock of Atlanta’s Historic Ebenezer Baptist Church in a bailout initiative to help fathers who were locked up in Atlanta for misdemeanors to get out of jail. Rev. Warnock honored all five activists with the Ebenezer Baptist Church Freedom Fighter award on June 17.

Mae D. Jones, former executive director of the 100 Black Men of DeKalb County, a mentoring organization that focuses on helping African-American youths to succeed, called the documentary “powerful.” She said she has been watching news stories closely about the case as well as comments on social media.
“When They See Us” should resonate with every African American person of how far we have come, yet, how far we still have to go,” said Jones. “In the aftermath of the exoneration, the financial settlement, and the public appearances, the men will always be known as the “Central Park Five,” an infamous title that will follow them to their graves.”

“Their experience was even worse than I can imagine. They deserve to be honored as the “Exonerated Five” for their strength, hard work and experience that has highlighted policies for interactions with the police and the subject of mass incarceration,” Mitchell.

According to the Georgia Innocence Project, there are an estimated 88,812 people who are innocent in the U.S. and an estimated 1,591 people innocently imprisoned in Georgia.