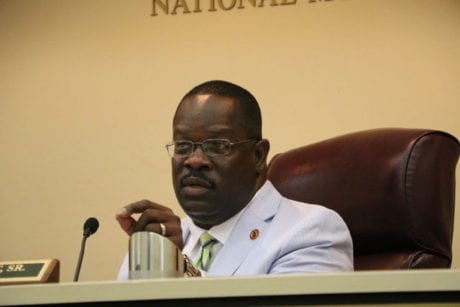 Rockdale County plans to amend the name of its Human Resources Department and create the “Department of Talent Management.” County officials said it wants to officially change the name to better reflect the county’s mission to not only recruit “world class” talent for job openings, but to provide training and career track guidance to those who desire to move up into other positions with the county.

“It’s part of an extreme makeover,” said Rockdale Board of Commissioners Chairman Oz Nesbitt. “I think that it’s important that each time we use the phrase or term “transitioning Rockdale into a world class community, then we’ve got to get in line with world class thinking. That’s what the Department of Talent Management is all about.”

The name change was discussed at today’s work session of the Board of Commissioners after Toni Holmes, who was hired in March as the county’s new Human Resources Director, made a presentation about the proposed name change. Holmes said the term “Talent Management” is known among Human Resources officials.

Commissioner Doreen Williams said she likes the proposal for the name change but wanted to know if those outside of Rockdale would understand that the department handled human resources and was not related to the filming industry.

“I like the name change, but I just want to know if that’s going to cause confusion for other counties,” said Williams.

The Board of Commissioners is set to vote on the ordinance abolishing the current name at its June 13 meeting.