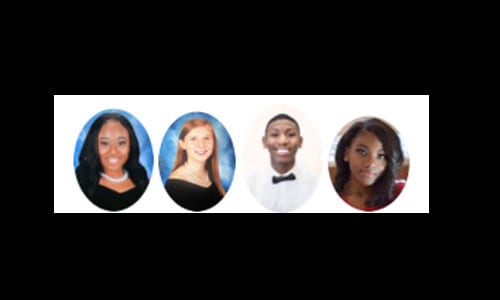 This is the 10th year the Rockdale Coalition has offered the $4,000 scholarship for a student who has demonstrated outstanding community service in Rockdale County and plans to continue that level of commitment while pursuing post-secondary education. The scholarship is named for John K. Morgan, former president and chief executive officer of Acuity Brands Lighting and community advocate.

For the third year in a row, the Rockdale Coalition partnered with the community’s two Rotary International clubs, the Rotary Club of Rockdale County and the Conyers Rotary Club, to present two $1,000 community service scholarship to two of the finalists.

“The Coalition’s mission coupled with Rotary’s ‘service above self’ motto makes it a natural fit to partner and offer scholarships to this talented group of students,” said Director of Rockdale Coalition for Children and Families Michael Hutcheson. “We were once again impressed by the talent and commitment these students have shown throughout their careers by giving so much of their time and talents to help others in need.”

Highlights of community service demonstrated by the four finalists include:

Daijah Buggs considers her participation in GIFTS (Girls in Focus to Succeed) and volunteering with Kingdom Builders Church as her most meaningful areas of service.

Sarah Burkey cites her volunteerism through Rockdale Baptist Church, WOWS (Women on the Way to Success) and Rockdale Magnet Peer Mentors as motivation for community service.

Chase Malone’s role in co-founding the Black Stem Student Union and serving as a member of Sophisticated Men of Excellence, the Rockdale Magnet Ambassadors and peer Facilitators has shaped his passion for helping others.

The Rockdale Coalition for Children and Families is pleased to announce the recipient of the $4,000 John K. Morgan Scholarship is Chase Malone. The Rotary Club of Rockdale’s $1,000 scholarship recipient is Daijah Buggs and the Conyers Rotary Club’s $1,000 scholarship recipient is Sarah Burkey. Hannah Reaves is the recipient of the $1,000 Facie Goodman Scholarship in honor of the Rockdale Coalition’s dedicated former employee and community advocate who retired in 2019.

For more information on the scholarship program and recipients, call 770-761-9244 or email Michael Hutcheson at director@rockdalecoalition.org.