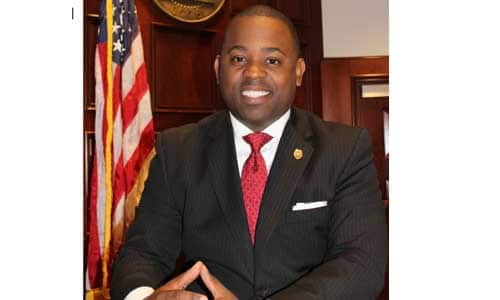 Members of the BOC expressed their appreciation for Cambric’s service.

“It has been an honor and a pleasure to work with Corey. He is an innovative task master who always finds a way to perform a task. His commitment to this community is unrivaled. I am sure that he would do well in any future endeavor and any organization will be lucky to have him,” Commissioner Sherri Washington said.

“I have appreciated Mr. Hambrick as the Chief of Staff in overseeing and coordinating the process of developing the Envision Rockdale Strategic Plan. This had been a priority of mine since 2014. To see it through to fruition with the guidance of Hambrick was extremely pleasing,” said Commissioner Doreen Williams.

Hambrick was unanimously appointed Chief of Staff by the Board of Commissioners in 2017, after previously serving at the City of Conyers Police Department.

“Serving the County in the capacity as Chief of Staff has been an honor. I thank Chairman Oz Nesbitt Sr., Commissioner Sherri Washington, Esquire, and Commissioner Doreen Williams, Ed.D. for their support and leadership during my tenure. I am also grateful for and thank the more than 13 departments and teams with whom I have had the pleasure of working alongside,” said Hambrick. “Rockdale County is a jewel with First Class citizens for which I am fortunate to have witnessed firsthand. My family and I are humbled for the opportunity to have served and pray the continued success for an economically thriving county whereby public safety is essential, community is meaningful, and love abounds.”

Hambrick’s accomplishments during his tenure with Rockdale include: