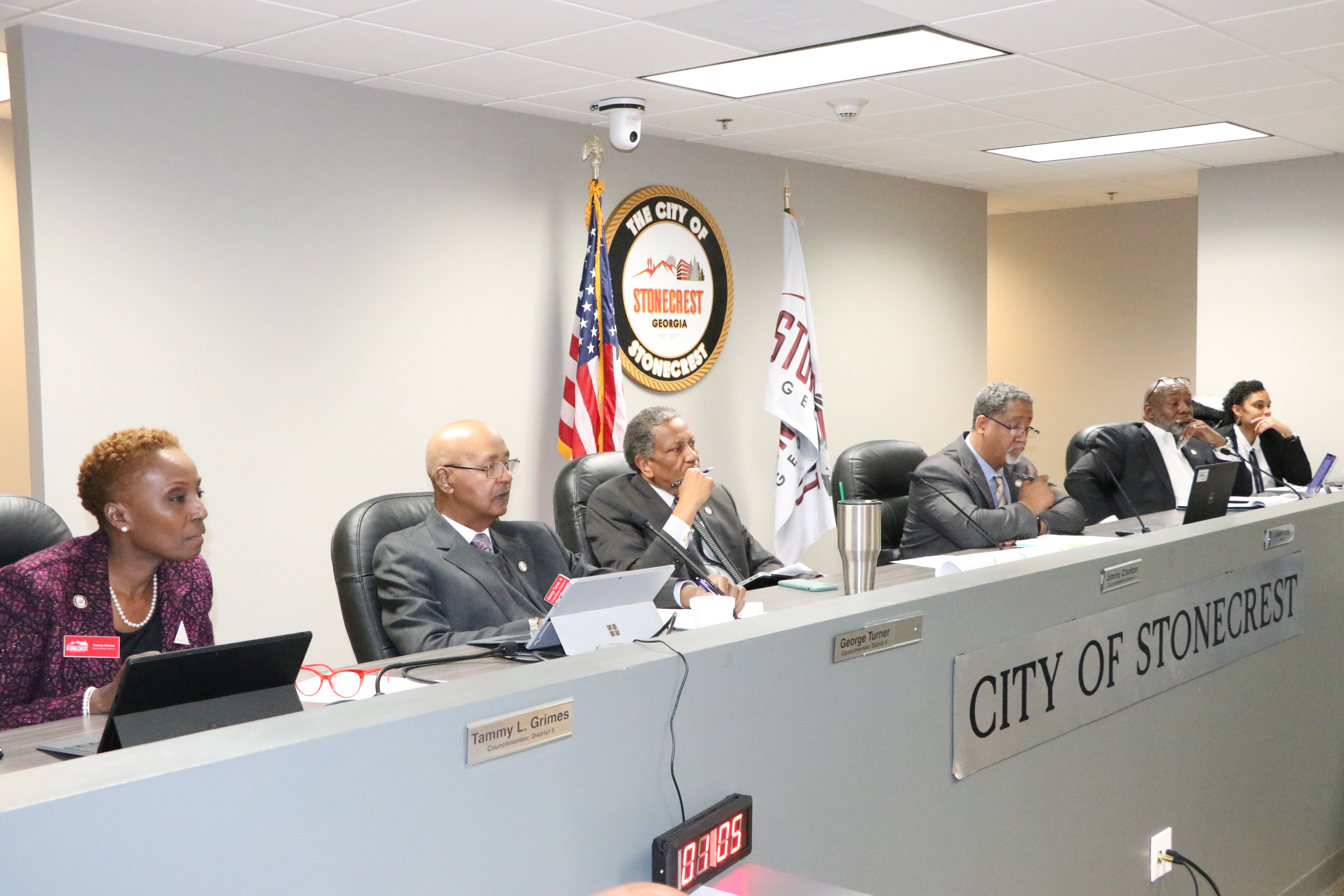 Residents condemned the four Stonecrest City Council members who staged a walkout on Feb. 10 after their motion failed to excuse Councilwoman Jazzmin Cobble for missing two city council meetings in 2019.

Although the city announced that it was dropping its lawsuit on Feb. 18 to determine if Cobble should forfeit her seat because of the absences, tensions remain in the city.

The Feb. 24 City Council meeting drew a crowd. Four residents drew applause as they each expressed their discontent over the actions of those who walked out: Council members Cobble, Tammy Grimes, George Turner and Rob Turner. Councilman Jimmy Clanton and Mayor Jason Lary, who had voted against the motion to excuse Cobble, had remained on the dais on the night that a bewildered audience watched the walkout unfold.

Harriet Harris told the council that she recalled taking her seat and wondering if there had been an emergency as the members vanished one by one. She said she had a different perspective after the mayor shared with the audience why the four council members had walked out.

“…The kind of behavior exhibited, in my opinion, was very childish and unprofessional. The City Council members and staff are elected to do work on behalf of the people of this city—not to bicker, to squabble over personal issues. I would therefore ask that you all please settle disputes between you away from the public eye in a professional manner which does not gain negative publicity for our city…,” said Harris.

Jeremy Scott also called the council members’ behavior “childish,” admonishing them for their treatment of students from Arabia and Lithonia high schools. The Student Government Association members were attending the City Council meeting to present their strategic planning input on the city’s Parks and Recreation Department.

Said Scott: “…You had a group of high school students who put work in to present to you the work that they had done and tell you what they wanted to see in their city. And for you to get up and walk out and take that chance away from those kids, you ought to be ashamed of yourselves. Like she said we elected you to represent us. That was not indicative of who I elected to represent me.

Faye Coffield was the only speaker who offered a different perspective on the walkout.

“I guess I’m going to be the odd ball of the group tonight because sometimes justice takes a protest one. I’m old school Civil Rights from the 60s and 50s. I just believe in protests,” said Coffield, who used the rest of her three minutes to address other issues concerning the city.

Bill Bruckner said he didn’t understand how elected paid public servants could “walk out on their constituents without a word of justification and disrupt and delay the business of the city.” He criticized the members for ignoring the fact that several important items were on the agenda for vote, including the financing for the purchase of the former Sam’s Club building and the Sears building. The city was forced to hold a special called meeting on Feb. 26 to determine what action to take in order to keep the deals on the table.

“Experts and common sense will tell you that you can’t resolve anything by walking away,” Bruckner said. “Besides, the job which you were elected and which you are paid for is to be present and to govern. You can’t govern, if you’re not present.

Susan Lee told the council members that she was embarrassed and angry about the walkout.

“Your actions were disrespectful to the invited students, their parents, the educators and the citizens of Stonecrest that took time to attend that meeting. You four owe us an apology for your unprofessional behavior… Councilwoman Grimes, you are the new kid on the block so consider yourself initiated by the group. It was disrespectful to you, Mayor Lary and your constituents to talk you into joining them. Councilwoman Grimes, please get the facts before you follow the crowd,” Lee said.

The infighting is still brewing. On Feb. 26, Lary and Cobble were the guests of WAOK radio talkshow host Rashad Richey. Both told their sides of the story in separate interviews.

At the special called meeting on Feb. 26, Cobble and Grimes voted against a tax anticipation note to fund the city’s purchase of the Sam’s Club building, which is slated to become the City Centre that will house the new City Hall. For more on the tax anticipation note.