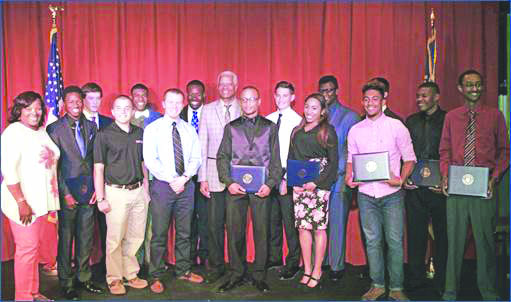 In advance of this round of nominations, staff from Johnson’s office held more than 24 information sessions at schools throughout the district, which includes parts of DeKalb, Newton and Gwinnett counties and all of Rockdale County.

“Putting forward nominations of Fourth District students for admission to the U.S. Military Academies is one of the most important jobs we do each year,” said Johnson, a member of the House Armed Services Committee.          “The nomination process is not easy. It’s a long road, and I congratulate all our nominees. All of our outstanding nominees are at or near the top of their class in academics, athletics and community service. It’s quite an accomplishment and all our students and their parents should be justifiably proud.”

To be considered for an appointment to a service academy, applicants must be nominated by a member of Congress or other authorized nominating source. However, final admission is determined by the respective academy. All members of Congress may nominate up to 10 candidates per opening. Those who graduate from a Service Academy will receive a Bachelor of Science degree, be commissioned as a 2nd Lieutenant, and honorably serve in the military for a minimum of five years.

For more information about the nomination process, contact Congressman Johnson’s office at 770-987-2291 or visit  hankjohnson.house.gov/serving-you/military-academy-nominations.