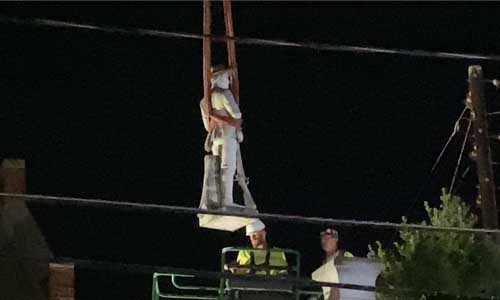 There were cheers and jeers as Rockdale County Board of Commissioners Chairman Oz Nesbitt addressed the crowd who gathered last night(June 30) to witness the removal of the Confederate monument, which had stood 107 years outside of the county courthouse on Main Street.
Though the crowd shared the same space, they were largely divided during an event that started at 10 p.m. and pushed past midnight. Some angry whites heckled Nesbitt, while blacks cheered as he explained his “executive decision” to remove the statue following heated debates this week ahead of a protest that was scheduled for July 2.
Nesbitt said that the county would stand united as one Rockdale, regardless of a difference of opinions on the removal of the monument.
“Tonight, I realize that there are some people here who are disappointed I also acknowledge and recognize that there are some people here who are excited,” Nesbitt said. “We are one Conyers and we are definitely one Rockdale.”
Following Nesbitt’s remarks and prayers by three local pastors, several whites sat at the base of the statute in a brief protest of defiance after law enforcement ordered everyone to stand behind a taped-off section so that the removal crew and cranes could move in to begin taking down the monument.
When the soldier was removed from the top of the monument, a group of whites began singing “God Bless America,” some in tears, while a group of blacks began singing the goodbye song from the movie, “Remember the Titans (2000).”
Meanwhile, organizers of a planned protest announced that instead of protesting, they would celebrate the removal of the monument on July 2, 4 p.m., outside of the Rockdale Courthouse.
You can view our videos on last night’s coverage here: https://youtu.be/YmsnnCI1vHI
https://youtu.be/G8VizXMWXTQ
Post Views: 292