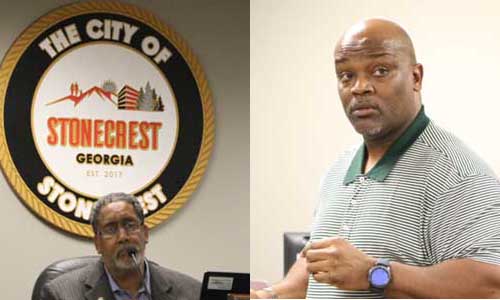 Stonecrest Mayor Jason Lary said the city plans to soon hire a road maintenance supervisor to begin addressing potholes and other road issues. Residents have been clamoring for help, complaining that potholes are plaguing the city’s streets and tearing up their vehicles.

“We’ve put in the budget to hire a road maintenance supervisor with regards to those particular things,” Lary told CBS46Atlanta reporter Melissa Stern during an interview on Jan. 15 just before the City Council’s work session and council meeting was held.  “We have money now instituted through our SPLOST Program to be able to repair and fill those potholes, and we’re constituting now, even as we speak, a citizen’s pothole committee, so they can tell us exactly where these potholes are.”

While SPLOST-funded road projects have begun in DeKalb County, the city of Stonecrest is now more than six months behind on its SPLOST program. The program has been at a standstill as the City Council tries to determine who will manage the program.

Meanwhile, Kerry Williams, a civil engineer and a member of the city’s SPLOST Advisory Committee, told the council at its meeting on Tuesday that the city must move swiftly to take advantage of this year’s paving season.

During a presentation, Williams urged the council to use a Pavement Management System to analyze and prioritize the road repairs needed and the costs. He recommended that the council use current staffing and city engineer to manage the process, rather than go through a procurement process to hire a project manager. He said if the city moves forward quickly, Stonecrest could get on track for the paving season, which runs from April to early November during Georgia’s warm weather period.

“If you wait and hire a SPLOST project manager, data collector and a paving contractor, you may not be able to begin paving until October,” Williams said.   “If you start paving in October, then you have missed the paving season for 2019.”

“We recommend that the council move forward without the procurements of a project manager, instead hire somebody immediately that will do your road evaluations.  This will allow the city to begin paving in July,” Williams said.  “A lot of the good paving contractors have already booked their 2019 paving season, so the city must move fast because by March the contractors will be out in full force.”

Lary said he is ready to move forward, however, the City Council must vote to approve the funding of the paving projects as well as the method in which the city will move forward with its SPLOST contracts.

“Once that is done, we can move forward—hopefully, by the Spring,” the mayor said.  Last month, the city’s SPLOST fund balance was $4.8 million.  Approximately $600,000 is added to the fund monthly.

To view engineer Kerry Williams’ presentation, visit this link. His presentation starts at the 6:55 mark.