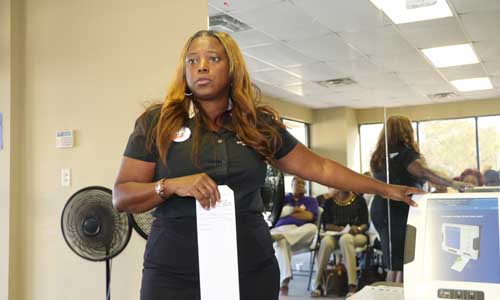 Rockdale is the first county in Georgia to pilot the new machines, which will provide voters with a paper ballot they can examine before casting their ballot in a tabulator machine that counts the votes.

Welch allowed people attending the Rockdale Democratic Party’s meeting on Sept. 23 to try out the machines.

The Rockdale Board of Elections approved the pilot at its Aug. 10 meeting and the city gave the nod on Aug. 16 to move forward with the project.

Welch said voters have been asking for a print ballot for years. Voters wanted a way to verify what they had actually touched on the screen before casting the ballot, she said. Welch said the ExpressVote system made by ES&S is a solution she hopes state legislators will look at using and funding statewide.

“With the current system, you view two races at a time on the touch screen. With the new system, you’re viewing only one race at a time. After you are satisfied with your vote, you print it, review it and put it in a tabulating machine,” Welch said.

Candace Broce, press secretary for Secretary of State Brian Kemp, said the pilot would only be conducted in Rockdale for the municipal elections. There is no additional costs to taxpayers, she said, to use the machines.

“The state worked out an arrangement with the vendor, Electronic Systems and Software (ES&S), to provide the machines at no cost for the pilot,” Broce said.

ES&S is the world’s largest elections-only company. It has provided election dequipment, software and services to municipalities and counties for more than 30 years.