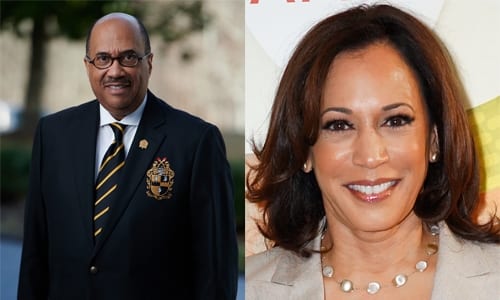 The National Pan-Hellenic Council is among the well-wishers from around the nation congratulating Sen. Kamala Harris on her historic selection as Joe Biden’s running mate for U.S. President for the 2020 election.

Biden announced Harris as his pick for vice president on Aug. 11. Harris is the first black woman and the first person of Indian descent to be chosen for a presidential ticket.

Dr. Everett B. Ward, Chair of the Council of Presidents of the National Pan-Hellenic Council Ward, issued the following statement:

“…I join my colleagues in congratulating U.S. Senator Kamala Harris on her selection to be former Vice Preisdent Joe Biden’s running mate for the presidency of the United States of America.

As a member of Alpha Kappa Alpha Sorority, Inc., an NPH member organization, Sen. Harris represents the high standards of public service and leadership that define members of the National Pan Hellenic Council.

Sen. Harris’ record as a U.S. Sen. supports issues regarding higher education, criminal justice reform, health care, economic development, HBCU sustainability, and protecting the right to vote. These issues, among others, that Sen. Harris supports are critical public policy issues for the Council of Presidents and the members we represent.”