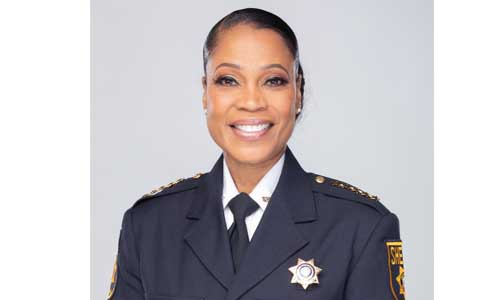 Melody M. Maddox officially took the reigns as DeKalb County’s new sheriff after the Thanksgiving holiday. Maddox was sworn in on Sunday, Dec. 1, 2019 by DeKalb County Superior Court Judge LaTisha Dear Jackson to fill the unexpired term of Jeffrey Mann, who retired at the end of November.  Maddox becomes the county’s 50th sheriff and the first woman to hold the position.

Maddox was appointed Chief Deputy Sheriff in July of this year to fill the position held by Reginald B. Scandrett, who retired in June.

A Decatur resident, Maddox became Chief of Police for Georgia Piedmont Technical College in DeKalb County in 2016. She managed a team of sworn officers and civilian personnel responsible for public safety and security for students, faculty, visitors and facilities on the college’s six campuses.

A Georgia P.O.S.T. certified law enforcement officer, Maddox began her law enforcement career with the sheriff’s office in 1996 as a Detention Technician in the Jail Division. In 1997, she joined the DeKalb County Police Department where she held positions of increasing responsibility for ten years as Master Police Officer, Chief Aide & Crimes Analysis Officer, and Field Training Officer. She completed training programs in Emergency Management and Information Command Systems Training and she is a P.O.S.T. Certified General Instructor in ethics, integrity and professionalism as well as Defensive Tactics.

Maddox received her bachelor’s degree from Morris Brown College and her master’s degree from Central Michigan University. She is a graduate of Newburgh Theological Seminary and Bible College, a member of the Leadership DeKalb Class of 2017,   Alpha Kappa Alpha Sorority, Inc. and the DeKalb NAACP. She serves with Women to Women Personal Awareness and Safety Training, and she has been honored for her career achievements and community volunteerism by numerous civic and business organizations.

The public is invited to attend an inaugural celebration on Dec. 16, 6 to 9 p.m. at Saint Philip AME Church, 240 Candler Road SE, Atlanta.