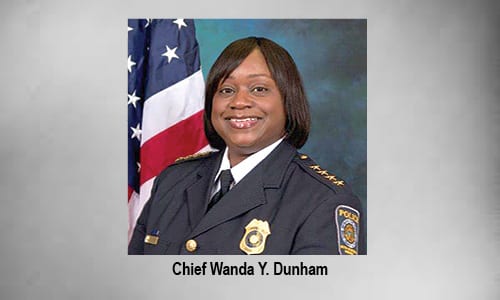 Dunham made history in May 2006 with her appointment to Chief of Police/Assistant General Manager at MARTA, the country’s ninth largest transit agency. She is the first African-American and woman to hold this position.

“I have had the privilege of serving the customers of MARTA for the last 30 years. I am honored to take on this new role and continue providing a safe riding experience for our valued MARTA patrons,” said Chief Dunham.

As a member of MARTA’s executive team, Chief Dunham will have expanded areas of responsibility including the Department of Safety and Quality Assurance, the Office of the Chief Information Security Office (CISO) in addition to her existing responsibility for Police and Emergency Management.

The MARTA Police Department has distinguished itself as one of the top law enforcement agencies in the country under Dunham’s direction, receiving consecutive Gold Standard Awards from both the Commission on Accreditation for Law Enforcement Agencies (CALEA) and the Transportation Security Administration (TSA) Baseline Assessment for Security Enhancement.

“In this new role, Chief Dunham will be able to streamline critical safety and security functions, and provide critical leadership around some of MARTA’s most important and impactful events, including the Super Bowl LIII,” said Jeff Parker, MARTA’s General Manager/CEO.

nextCity of Stonecrest’s controversial SPLOST deal back on table