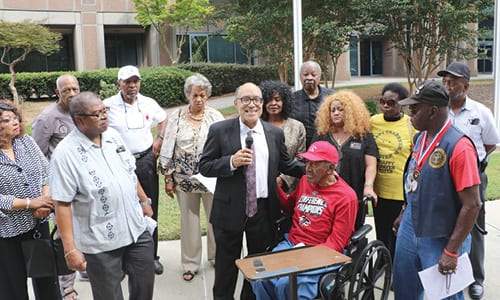 The MARTA Board of Directors approved a contract on Sept. 6 to extend bus, rail, and mobility services into Gwinnett County, paving the way for a countywide ballot referendum scheduled for March 2019.

If Gwinnett voters approve the referendum next year, MARTA would assume control of six bus routes and five express routes that take commuters to destinations inside I-285 that are currently operated by Gwinnett County Transit.

“We are excited about the opportunity to transform the region and provide greater connectivity,” Ashe said.

Said MARTA General Manager & CEO Jeffrey Parker:  “Our lives don’t stop at county lines and this is a chance to further connect all the communities of metro Atlanta.”

The MARTA board’s decision, however, has touched off a firestorm among advocates who have been fighting for years to bring heavy rail to South DeKalb County.

“We’re going to start a new crusade to get some money for black folks,” said long-time South DeKalb community activist John Evans. “They have stolen from us to give to other folks for years. All of the promises have never happened. We just go to board meetings and leave empty handed.”

Under the proposed contract, a one-percent sales tax would be collected in Gwinnett County to fund transit operations, capital expenses, and expansion through 2057. Projections show the sales tax would raise approximately $170 million per year, or $5 billion during that period.

Gwinnett County recently adopted a transit development plan that envisions a heavy-rail line from MARTA’s Doraville Station to Gwinnett Place Mall along the I-85 corridor as well as bus rapid transit (BRT) and increased local bus service to serve its fast-growing population and to alleviate traffic congestion.

Viola Davis, the newly-elected State Rep. for House District 87, said she was not surprised by the MARTA board’s decision to take over transit in Gwinnett, but questioned why Gwinnett would only have to turn over a percentage of the 1 percent sales tax to MARTA.

“DeKalb has had to turn over the full 1 percent. That is not the equation mapped out for Gwinnett,” said Davis, who attended the news conference and MARTA Board meeting with Evans and others, several of whom spoke during public comments. “If they (MARTA) can’t buy the 390 shelters and benches that they’re short of after taking in over $2 billion in taxes in the last five years, how can they afford to put all of that money in Gwinnett?”

Community activist Josie Dean said DeKalb, Atlanta and Fulton have shouldered the funding for MARTA for years and black riders were supporting MARTA when whites refused to ride public transit.

“We’re going to have to raise holy hell,” said Dean.

Former State Sen. Vincent Fort, District 39, concurred, saying: “This is what I call transit racism… The fight has only begun… The Beltline has over $400 million in this. They want all of the money. My attitude is don’t give the Beltline another dollar until they fulfill their commitment for affordable housing and make good on their promise they made 15 years ago.”

DeKalb CEO Michael Thurmond and Board of Commissioners Presiding Officer Jeff Rader said in a letter to the MARTA board that DeKalb wants the same commitment proposed to Gwinnett:

“…We believe it is as important for MARTA to renew its commitment to its original members with the same specificity and deference as the proposed contract offers to its newest prospective member.”

…For several years now, MARTA has made quarterly presentations to the DeKalb County Commission alluding to upgraded bus stops, improved amenities at MARTA rail stations, and new technologies MARTA is planning to deploy, but many of these improvements have not been accomplished. MARTA’s Comprehensive Operations Analysis has largely been experienced in DeKalb as the consolidation and elimination of routes that MARTA deems marginal, but new services and technologies purported to replace the obsolete ones have been conditioned on additional funding from DeKalb.”