The toilet paper was collected at several locations throughout DeKalb County from Feb. 12 to Feb. 23. Various county departments, along with the offices of District Attorney Sherry Boston and Solicitor-General Donna Coleman-Stribling. Additionally, Cedar Grove High School, DeKalb High School of Technology-South and Cedar Grove and Flat Shoals elementary schools participated in the drive.

“The county is pleased to support a project that addresses one of the most basic needs for humans,” CEO Thurmond said. “Our donation helps The Love Rolls project restore and protect the dignity of the homeless, needy and those who have gone through a natural disaster.”

Robinson said she was inspired to start Love Rolls, Inc. after volunteering at the Youth Summit hosted by the Atlanta Community Food Bank in 2015.

“A homeless man shared with me how he would have to ration out one roll of toilet paper to make it last a whole month,” said Robinson. “Toilet paper is a luxury that a lot of people take for granted.”

Robinson’s younger sister, Kaylin, and other volunteers pitched in to accept and distribute the donations, which are stored in a donated warehouse.

Robinson received a letter from President Barack Obama honoring her efforts. George’s Secretary of State Brian Kemp also honored Robinson and her sister with the Georgia Citizen Award for their community service.

Robinson, who will be presented a proclamation for “Love Rolls Day in DeKalb County” from CEO Thurmond and the Board of Commissioners on March 13, said she is grateful for DeKalb’s participation.

“To the people of DeKalb County, thank you so much for hopping on board and just standing with me and supporting me,” Robinson said. “I’m just so glad that you are so eager to give back to your communities.” 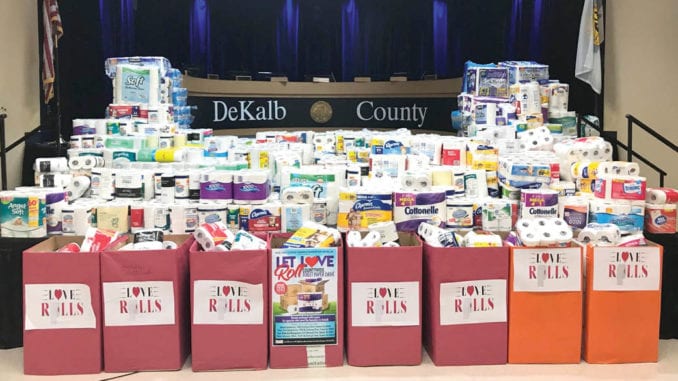