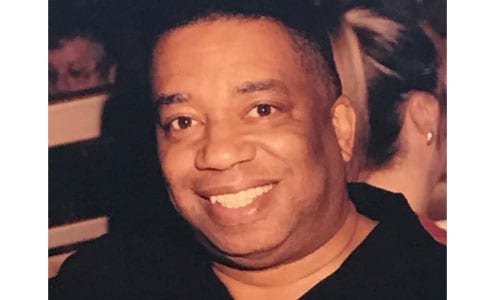 Ken Wilson is learning to walk and speak again. Since suffering a massive stroke while driving home from work last summer, Wilson, 54, has been on a roller coaster to recovery.

The smiling, big-guy Wilson, who worked with the Lithonia Jazz Concert series during its heyday, is now undergoing extensive rehabilitation therapy. His car, which was totaled in the July 11, 2016 accident, flipped and rolled over three times after he lost control. He suffered broken bones in his right arm, a dislocated shoulder and he was left paralyzed on his right side. He lost over 100 pounds after the accident. “He was on life support. He has come a long way. I’m so thankful that he pulled through,” said Angela Wilson, Ken’s wife.

Stonecrest Mayor Jason Lary and former Lithonia Mayor Darold Honore recently visited the Wilsons. Although Ken Wilson could not speak, he expressed his excitement through some movement, Lary and Honore said.

“We wanted to show our support and let him know that we care. He is a really good friend who worked with me for years in community development and with the concert series in Lithonia,” said Lary. “We’re praying for him and his family.”

Honore echoed Lary’s sentiments. He said he appreciated Wilson’s involvement with the city.

“He was always developing ideas to help market Lithonia and businesses in the city,” said Honore.

Al Franklin, a former Lithonia City Council member, has set up a Go Fund Me account to assist the Wilsons, who have two daughters, with paying for rehabilitation medical equipment, medications, doctor’s visits and other expenses.

Angela Wilson said her husband formerly worked as a regional operations manager for a staffing company. Although some of his care is covered through the medical insurance she carries through her employment as a legal assistant, a number of things are not covered by her medical plan, she said.

“We have medical bills that are for doctors out of the network that are not covered. We have to have special equipment for him to get around and transportation to therapy, which is not covered,” Angela Wilson said. “Our income has suffered significantly because he cannot work.”

Despite the financial challenges, Angela Wilson said she continues to pray and look on the bright side.

“While Ken was fighting for his life on life support, I had to have a hip replacement. Everything was happening to us at the same time. It was tough, but we are still here,” she said.

If you would like to help assist Ken Wilson, please visit his Gofundme page here or copy and paste the following URL: https://www.gofundme.com/kenwilsonstrokerecovery

nextDeKalb woman awaits sentencing in bludgeoning murder of her husband