Chamblee Bulldogs Antoine Benjamin and Zachary Mackson both hit two free throws in the final 9.7 seconds to close out a 60-54 Region 5-5A victory over the Arabia Mountain Rams at Chamblee on Friday night. 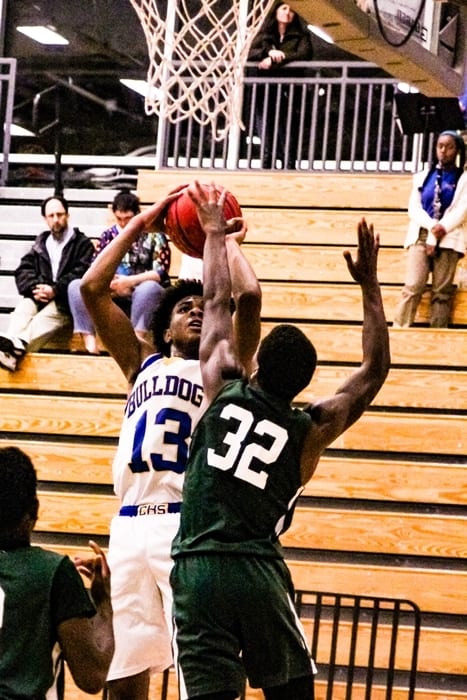 Benjamin was fouled with 9.7 seconds to play following the second of two consecutive Romero Head layups that pulled the Rams within 56-54. The sophomore guard calmly stepped to the foul line and sank both free throws to stretch the lead back out to four at 58-54.

The Rams got the ball inbounds and moved up court but the Bulldogs pressure at half court forced a turnover and Mackson was fouled as the Rams tried to get another chance. The clock showed just 2.1 seconds as Mackson hit his two free throws to give the Bulldogs a final margin of victory of 60-54.

Jason Outlier’s short jumper with 5:36 to play in the game pulled the Rams into a 47-47 tie with the Bulldogs.

Rodney Smith and Mackson both hit one of two free throws following Outlier’s shot. Smith went to the line a second time with just under four minutes to play as a technical was assessed to the Rams’ bench. Smith hit both free throws to make it a 51-47 Bulldogs’ advantage.

Franklin Champion cut the lead to 53-50 with a pair of free throws with 2:50 to play before Iam Irving sank a three-pointer to give the Bulldogs their largest lead of game at 56-50.

Arabia Mountain (2-7, 2-2) broke away from a 20-20 tie in the second quarter as Ridge Turner got an offensive board for a put back and then drove half the floor on a steal and pass from Head for the go-ahead basket.

Champion’s drive for a layup with 5.4 seconds remaining in the first half sent the Rams into the half up 26-23.

Brandon Gunn had a driving layup and came back with a three-pointer at the buzzer to cut the Chamblee lead down to 45-41 going into the final period of play.

Mackson led all scorers with 23 points on the night while Rodney Smith had a quiet 19 points to aid the Chamblee (5-4, 1-2) cause. Franklin Champion’s 14 points and 8 rebounds was the high points for the Rams. 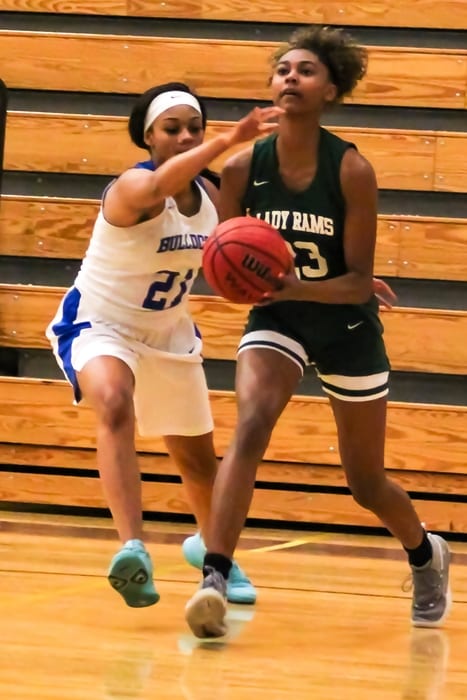 Chamblee’s 1,000-point scorer Trinity Edwards drove to the basket to give her team a 5-3 lead with 3:12 left in the first quarter. It would be the last lead of the game for the Lady Bulldogs.

Mikayla Jamison’s two quick baskets was the start of a 12-0 run by the Lady Rams as they took control of the game. Ward’s three to open the second quarter continued the run and by the time Alina Shoemake’s free throw made it 31-9 the No. 8 ranked Arabia Mountain Lady Rams had put together a 28-4 run.

The lead was 31-12 at the half and Ward came out hot scoring the first 10 points of the second half for the Lady Rams as she connected for two three-pointers in the run.

Kennedi Manning’s basket with 1:43 left in the third quarter helped the Lady Rams take a 49-17 advantage into the fourth quarter.

The two teams scored just six points each in the final quarter.

Jordan Ward led Arabia Mountain and all scorers with a game-high 14 points while Kennedi Manning finished with 12 points. Trinity Edwards added to her career total with a Chamblee high of 11 points and 8 rebounds.

previousDunwoody sets “Walk with a Doc”