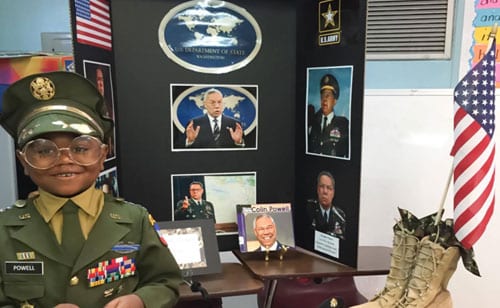 “It was a great honor to have the first African American Secretary of State to acknowledge Brendon’s achievement. He is only 6 years old and this type of recognition he will cherish forever. We are so proud,” said his mother Miriam Moore.

In honor of Black History Month, Brendon’s Kindergarten class was given names to research and present on in the form of a Live Wax Museum under the direction of their Social Studies Teacher, Ms. Perryman.

Gen. Colin Powell has also served as  Chairman of the Joint Chief of Staff and was a four star General in the US Army.

The project is one that got not only his mom involved, but his whole family including his dad, Brandon Moore and his grandparents. Together, they spent many weeks researching Gen. Powell; perfecting Brendon’s speech; working on his display and hand-built cardboard podium. They made many trips to the Army/Navy store and spent hours making the patches to look very similar to the ones Colin Powell wore.

Brendon received an A on his project. Brendon has been greatly inspired by General Powell and wanted to represent him well. Brendon Moore said he was “honored to do a tribute to an American hero.” previousDeKalb to extend moratorium on certain Special Land Use Permits