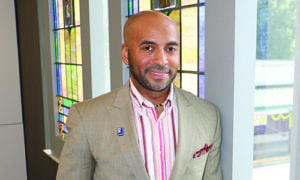 Keith Parker has a straightforward philosophy about being a successful business leader.

Parker is now putting that philosophy to work as he approaches his one-year anniversary in October as president and CEO of Goodwill of North Georgia, Inc., the largest workforce development organization in the Southeast.

Previously, Parker spent nearly five years at MARTA, where he served as CEO and is credited with turning around the financially-troubled transit agency. MARTA had more than $240 million in reserves when Parker left the agency last year to succeed Raymond Bishop, who retired in October 2017 after 27 years of service with Goodwill.

Parker said he loves his new role. He has the opportunity to continue fulfilling his passion—serving the community—though he serves in a different industry.

“They are different, but they’re both service industries,” he said in comparing his work at MARTA and Goodwill. “For me, it’s always been about service and how you impact communities in a meaningful way.”

Parker said he is transforming Goodwill by starting with the nonprofit’s employees.

“Many of our employees have not had raises in a while. So now, we’ve programmed in raises for the next five years. It’s in our 5-year strategic plan,” said Parker. “Our goal is to get our front line people to be at a market rate competitive with all of the other folks we compete with for talent. We have kept our healthcare costs amongst the lowest premiums out there. We have developed scheduling for employees so they know four weeks in advance what hours they are working”, said Parker, adding that he plans to increase Goodwill’s staff of about 3,000 by 1,000 people over the next five years.

Parker said Goodwill is planning a dramatic expansion that will include more employees for the nonprofit, more jobs and job training for the disadvantaged, disabled and underemployed, and more stores and donation centers.

“Over the next five years, we’ve already got programmed that we’re going to open 20 new stores, 12 donation centers, and two new career centers,” said Parker. “Our goal is we will be a $200 million-a-year organization and with that, we can do so much more to provide jobs and job training.”

Last year, Goodwill reported in its 2016 tax returns that the organization earned $148,151, 501 in revenues. The nonprofit connected some 24,000 people to jobs throughout North Georgia, Parker said.

Parker said his goal is not only to grow the number of jobs, but to provide good jobs.

“I want to be impactful, where people have a great sustainable career, rather than them just having a job,” Parker said.

Goodwill offers a range of jobs through its employer partners—from office positions such as budget analysts and administration to forklift operations certifications and apartment maintenance training.

“At our South DeKalb training facility, for example, for eight weeks, they (trainees) come in and learn how to prepare sheet rock, electrical, plumbing, all the things you need to do to maintain an apartment building. That training costs us upward of about $5,000 because we know that in a lot of instances, they can’t just go through the training and not have any income. We provide them with a stipend while they are training.”

Parker said once trainees complete the program, they’re ready to go to work.

“People are lined up and ready to hire them,” he said.

Goodwill has over 5,000 employer partners to help place candidates and 13 career centers throughout North Georgia. The South DeKalb center at 1295 Columbia Drive in Decatur is one of the busiest, officials said.

Goodwill is developing marketing strategies to get the word out about not only its job training programs but the organization’s overall mission, Parker said. Goodwill plans to launch a big marketing campaign in November, he said.

“People know about donating and shopping at Goodwill, but we must tell our story about how we turn those donations into supporting jobs and job training,” said Parker