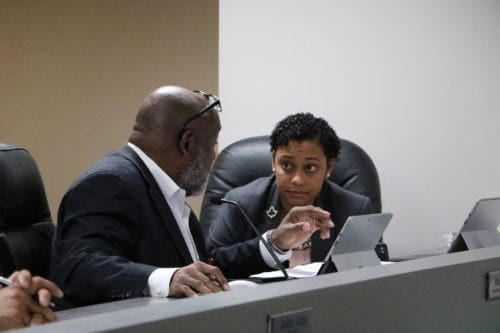 Stonecrest City officials have filed a declaratory judgment action to ask a superior court judge to decide whether Councilmember Jazzmin Cobble must vacate her seat because she missed too many City Council meetings last year, based on the city’s charter.

Four members of the City Council staged a protest and walked out of the City Council meeting on Feb. 10 after a motion failed to excuse Cobble’s absences retroactively. Due to the walkout, there was not a quorum to decide on several key issues including a vote on the bond deal through which the city would borrow the money needed to purchase the Sears building and the Sam’s building.

Cobble’s attendance came under scrutiny after citizens Saira Willingham and Michelle Emmanuel requested the 2019 attendance records for all City Council members. The requests from Willingham and Emmanuel were made on Jan. 20, according to emails obtained by On Common GroundNewsthrough Georgia’s open records laws.

Cobble, who represents District 3, was the youngest person elected to the city council at the time of her election in March 2017.

Under the city’s charter, Section 2.03 (a) states that a council person forfeits his or her office by “failing to attend one-third of the regular meetings of the council in a three-month period without being excused by the council.”

Cobble missed City Council meetings on Sept. 23 and Oct. 14, according to city records. Cobble told On Common Ground Newsthe absences were work related, but declined to discuss the matter further stating that her attorney would provide comment on her behalf at a later time.

After discovering that Cobble missed the allotted number of meetings, City Clerk Megan Reid said City Attorney Winston Denmark contacted Cobble by phone on Feb. 6 to notify her that she had missed two of six scheduled city council meetings during a three-month period in 2019, resulting into a forfeiture of her seat, according to the city charter.

Reid said on the same day, she, Attorney Tom Kurrie and Mayor Jason Lary met with the other four council members in pairs to discuss the matter. They held a 6:30 a.m. breakfast meeting with Councilmembers Tammy Grimes and Rob Turner at the I-HOP restaurant in Stonecrest. They met with Councilmembers Jimmy Clanton and George Turner at 11 a.m. at City Hall.

That afternoon, Councilmember George Turner requested a special called meeting to be held on Feb. 10 at 4:30 p.m. to vote the matters, listing two agenda items: “Excused absences” and “Withdrawal of lawsuit in the name of the city,” according to an email obtained by On Common Ground News.

Councilmember George Turner stated in the email that he had the support of Councilmembers Rob Turner and Tammy Grimes to hold the special called meeting. According to the city’s charter, Sec. 2.09.(e), “Special meetings of the city council may be held on the call of either the mayor and one  councilmember or three councilmembers.”

Grimes was not allowed to vote because she had not been elected and therefore could not retroactively excuse a councilmember’s absence and Cobble was the subject of the vote and therefore disqualified, city officials said in a statement.

Councilmember Rob Turner said during the special called meeting that although the council did not formally approve Cobble’s absences, he believed that the notifications from Cobble to the city clerk were sufficient “for an excused absence.” Cobble notified the city clerk by email concerning both of her absences.  The emails stated that Cobble would not be able to attend because of work, Reid said.

City Attorney Winston Denmark said, however, Cobble needed to have council’s approval for the absences to be excused and that did not happen. He said the council could not legally retroactively excuse Cobble for the absences, even if there is some ambiguity in the charter.

“Regrettably, the charter does not expand on being excused by the council. It doesn’t say without being first excused by the council nor does it say that the council can, after the fact, excuse an absence. If it is the case that the charter causes a forfeiture in office upon missing a third of the meetings, or, under some set of circumstances, that forfeiture would occur by operation of law,” Denmark said. “It is my opinion that once the office has been forfeited, the council could not retroactively go back and excuse the absences.”

The mayor said that notifying the city clerk of an absence does not constitute an excused absence.

Clanton and Mayor Lary continued the council meeting, although they were only able to make special presentations because there was not a quorum to vote on city business. Following the presentations, he discussed what led to the walkout. He said a precedent for how the council must vote to excuse an   absence had been set when he announced in September 2018 that he was battling prostate cancer and asked the council’s permission to be absent.

“The only person that would excuse me was Councilman Jimmy Clanton. I got emails like ‘Well, should we pay him? How long does it take before he’s out of office? It was nothing with regard to what my plight was or what my wife’s plight is at this point,” said Lary.

Lary said he continued attending the City Council meetings because he could not get the council’s approval to be excused.

“Their action to ignore my request certifies that each councilmember, including Cobble, was aware that there had to be action taken by council to excuse any absences,” Lary said.

Lary and Rob Turner missed one council meeting in 2019, according to the city clerk’s records. Clanton and George Turner had perfect attendance, along with Diane Adoma, up until she resigned last year in an unsuccessful bid for the office of mayor.

The two special called meetings were: Oct. 3 and Oct. 23, according to city records.

Lary said he found it hard to believe that the council wanted to retro-actively excuse Cobble’s absences because of her full-time occupation.

“How do you not let a person off for cancer? It doesn’t matter that it’s Jason Lary or not. How do you not vote for that? How do you not do that when the person that is ill is asking to be excused? And then you turn around and somebody else is busy and they can’t fulfill their obligation to the electorate while still being paid by the city? And you’re going to retroactively vote for them to be absent? How fair is that? Lary said.

Clanton said he voted against excusing Cobble’s absence because voting for it would have meant changing the charter without proper protocol.

“We cannot on the fly change the charter to suit ourselves and our self-interests,” Clanton told the public during the City Council meeting.