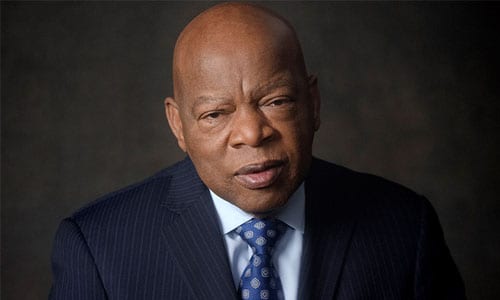 Due to the coronavirus pandemic and high-level security provided for the former Presidents, access to the funeral, which was handled by Willie Watkins Funeral Home, was restricted to family and invited guests. Participants wore face masks–a common scene at funerals and other public events to slow the spread of the deadly coronavirus.

Former Presidents George W. Bush spoke about the respected statesman that Lewis became, pushing beyond his humble beginnings where he helped his family raise chickens. Former President Clinton remembered Lewis as a devoted public servant who believed in a future without racism.  Former President  Obama, in  delivering a rousing eulogy, called Lewis a beacon who saw the best in all of us.

“He believed in all of us, there exists the capacity for great courage, a longing to do what’s right, a willingness to love all people, and to extend to them their God-given rights to dignity and respect,” Obama said.

Former President Jimmy Carter could not attend due to his health but sent a letter, which was read during the service.

The homegoing in Atlanta marked the final stop of a six-day celebration of Rep. Lewis’ legacy in Alabama, Washington, D.C. and Georgia.

The day before the funeral was held, Rep. Lewis’ body arrived in a motorcade to lie in state at the Georgia Capitol as onlookers paid their respects. Outside of the Gold Dome, people signed giant farewell cards honoring the Civil Rights hero, who served Georgia for more than three decades. Mourners lay flowers near a John Lewis mural, located at the corner of Auburn Avenue and Jesse Hill Drive in downtown Atlanta, not far from the Capitol. Lewis stood at that corner and spoke during the mural dedication honoring him on Aug. 24, 2012.