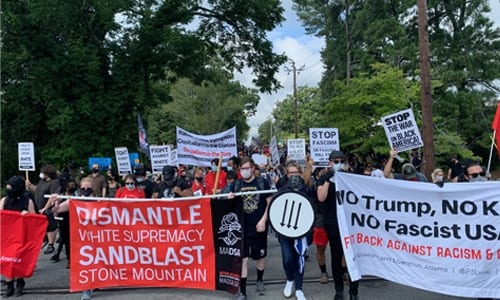 STONE MOUNTAIN—Hundreds of white supremacists, heavily armed militia, the NAACP and Black Lives Matter operatives clashed on Aug. 15 as arguments over the removal of Confederate monuments and politics became tense. Some small fights broke out as groups shouted at one another, spraying insect repellant or pepper gas, but a heavy police presence in the city’s downtown curtailed serious violence. Law enforcement officials reported no arrests.

“Thanks to a coordinated effort led by the DeKalb County Police Department in close collaboration with the City of Stone Mountain, today’s demonstrations in Stone Mountain resulted in zero injury complaints, zero arrests, and no uses of force.