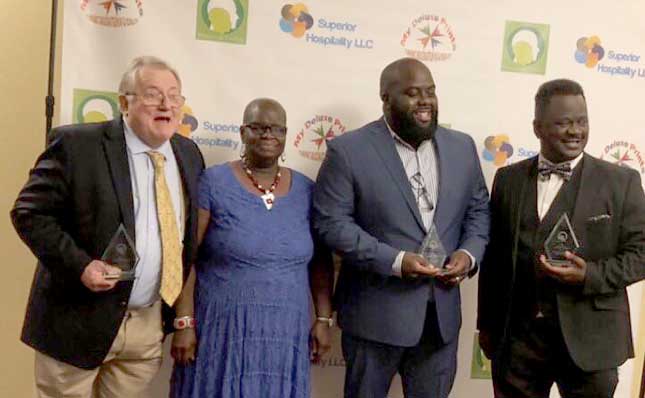 Honor Thy Father, Inc., a DeKalb County nonprofit, hosted an awards dinner to recognize three outstanding community volunteers on June 15 at the Doubletree by Hilton Hotel in Tucker.

Jerald Bryant Jr., a school football coach, Pastor Mauricio Sonny and Pastor Marty Barrett were recognized for the guidance and counsel they have provided to numerous individuals and single-parent households headed mainly by mothers.

For the third consecutive year, during the Father’s Day Weekend, Honor Thy Father Inc. honored men who have tirelessly cared for the future generations by supporting single mothers in raising their children.  The annual awards dinner is named in honor of Eric N. Clark, who has mentored countless young men for more than 25 years.

Honor Thy Father Inc. was founded by Ms. Bertley Bernard, chief executive officer of the organization.

“It was not my plan to be a single mother but as life’s circumstances would have it, I was a single mom of four boys,” Bernard said. “Although I worked very hard to provide them with what they needed, I couldn’t teach them to be men. I was blessed by a community volunteer who offered to assist in instilling values in my sons. Years later, the Lord impressed upon me to recognize men like Mr. Eric Clark who are often overlooked.”