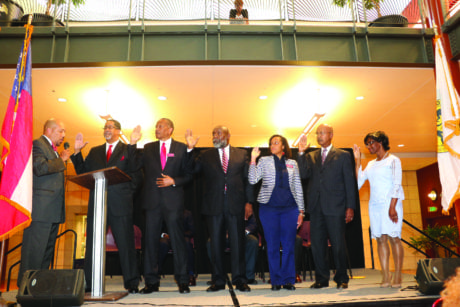 The first elected officials of Stonecrest, a new city of 50,000 residents in Southeast DeKalb County, took their oaths of office on May 1, giving birth to the municipality’s first government. A cheering crowd witnessed the historic event, which was held at the Mall at Stonecrest on the ground level near the Sears department store.

There were so many who attended the 7 p.m. celebration, which was coordinated by Council member Jazzmin Cobble, that some watched the ceremonies from the second floor above the stage and audience on the ground floor.

Joel Thibodeaux, chair of the Stonecrest Governor’s Commission, which was appointed to oversee the transition of the new government, welcomed the crowd, telling them the historic day had finally arrived.

“It’s been four years of planning, hard work, development, sleepless nights and trips down to the state capitol, community meetings, forums, an election, a runoff and now, we’re finally here: The city of Stonecrest is born today!” Thibodeaux exclaimed.

The Miller Grove High School ROTC presented the colors and the Pledge of Allegiance was recited following the welcome.

Thibodeaux and the Stonecrest officials were joined on stage by New Birth Missionary Baptist Church’s pastor, Bishop Stephen A. Davis, who gave the invocation, and DeKalb CEO Michael Thurmond, who made remarks after the swearing-in ceremony.

Several dignitaries attended the inauguration including three members of the new city of South Fulton, whom Lary acknowledged during the program.

This Is It restaurant catered the reception following the program.