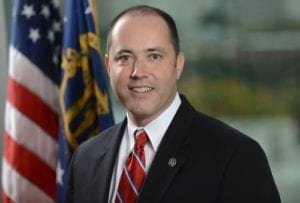 Carr will take office on Nov. 1, when Olens transitions into the role of president of Kennesaw State University.
“Carr’s experience as an attorney, job creator and public servant make him the ideal candidate to fill the role of Georgia’s attorney general,” said Deal. “He is a leader with common sense, brilliant intellect and a wide range of experiences at the global, federal and state levels. That perspective will allow Chris to support and defend the laws of Georgia and the interests of our people. This role is a hybrid one of attorney, manager and public servant, and Chris is well qualified for it.”
Deal appointed Carr in 2013 to lead GDEcD, the state agency charged with helping to create jobs and generate investment in Georgia. During his tenure, GDEcD helped facilitate 1,055 projects across the state that represent $14.1 billion in investment and created more than 83,000 jobs. In 2015, GDEcD was recognized as the top economic development agency in the country. Carr has also served on the Judicial         Nominating Commission (JNC), the body charged with reviewing and recommending judicial appointments, since January 2011. To date, the JNC has filled more than 100 judicial vacancies statewide.
“I am truly honored and humbled that Gov. Deal has placed his confidence in me,” said Carr. “As I take on this new responsibility, I believe there is no more solemn duty than to protect and defend the Constitution of the United States, the Constitution and laws of the state of Georgia, and the interests of the people of our great state. The seriousness of this work requires focus on a smooth transition and a readiness to tackle our state’s challenges and opportunities—and that’s what Georgians should expect to see from me.”