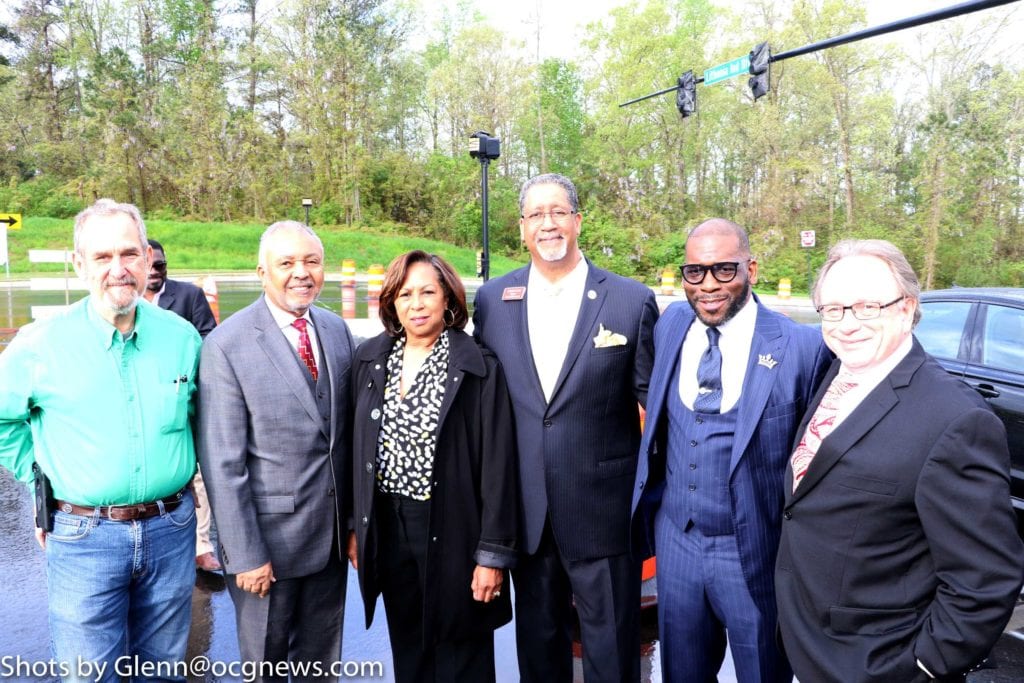 Not even the rain could dampen the spirits of those attending the 9 a.m. event. Mayor Lary asked New Birth’s Elder Vanessa Long to perform the ribbon cutting ceremony and the showers subsided just in time for her to perform the honor. The crowd cheered as Elder Long worked a giant pair of scissors, and after several unsuccessful attempts, sliced the red ribbon.

Elder Long said she was pleased to see the vision of her late husband, Bishop Eddie Long, come to pass. Bishop Long, who served as New Birth’s senior pastor from 1987 until his death in 2017, planned for the road years ago to accommodate the church’s mega congregation, but the project stalled and lacked federal funding until recently.

City spokesman Adrion Bell said the road is expected to open on April 17.

Georgia Power is working on getting the traffic signals up and running and the road should be open for people to start using after that,”said Bell.

Elder Long said she is elated about the new extension.

“It’s been a long time coming. He had a great vision not only for New Birth, but for the DeKalb County community. Just to see it (the new road) finally come to pass means everything to me,” said Elder Long.

Dr. Jamal Bryant, who now serves as New Birth’s senior pastor, said he sees the road as a path to saving souls.

“This is historic. There is no other church in America that can boast of its own highway exit,” said Dr. Jamal Bryant, New Birth’s pastor. “This is, in fact, a metaphor for us pointing a direction for people who are lost, saying you are on the right path. This is where you get back on track. New Birth is glad to be the epicenter of the DeKalb County community to show people the direction and a new lease on life.”

Edward Long, who also attended the event, said he believes the rain signified that his father was in heaven crying tears of joy.

The four-lane road, nearly a mile long, connects the campus of the New Birth campus, located at the intersection of Evans Mill and Woodrow Roads to Lithonia Industrial Boulevard and Highway 124.

Mayor Lary said the new road will not only relieve traffic congestion in the area, but will be a big boost to the city’s economic development engine.

“This has been in the making for a while now. It allows for the gateway to economic development and the city’s transit-oriented district,” said Lary.

The mayor said the new road would complement repaving the city has scheduled for a two-lane section of Turner Hill Road, from Rockland Road to the entrance at Bojangles restaurant. The city also will begin repairing potholes and resurfacing 18 of the city’s worst streets with Special Purpose Local Option Sales Tax
(SPLOST) funding.

Lary said the City Council has approved a $2 million contract with Blount Construction to make the repairs. The work is scheduled to start in  May with completion by the end of  August, he said.