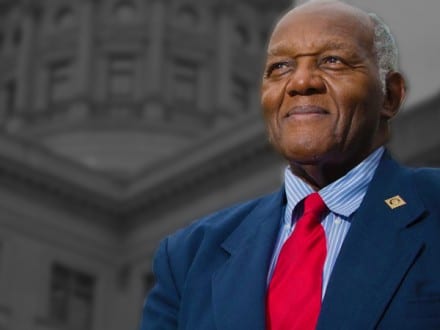 Funeral arrangements have been announced for Dr. Lonnie C. King Jr. who died Tuesday, March 5. The Civil Rights leader’s graveside service and internment will be held at noon Monday, March 18 at Georgia National Cemetery (1088 Scott Hudgens Dr., Canton), and a memorial service will take place at 11 a.m. Tuesday, March 19 at Ebenezer Baptist Church (450 Auburn Ave. NE, Atlanta).
Atlanta City Council President Felicia A. Moore called King “a visionary who embodied bravery and tactfulness in the face of danger.”
“Like many of our great civil rights leaders, Dr. Lonnie King captivated the hearts and minds of thousands of people and showed them that there is strength in numbers,” said Moore.
A U.S. Navy veteran and graduate of Morehouse College, King was among Atlanta University Center students who pushed back against university leaders’ attempts to quash protests in a segregated Atlanta in 1960. King was a founding member of what became known as the Atlanta Student Movement and supported other Civil Rights Movement leaders including Rev. Dr. Martin Luther King Jr. (to whom he was not related) and fellow Atlanta University Center student Julian Bond. King was a founding member of the Committee on Appeal for Human Rights, a group of Atlanta University Center students who drafted, published and disseminated “An Appeal for Human Rights,” a promulgation calling for complete desegregation.
Post 1 At-Large Atlanta City Council member Michael Julian Bond, former Council President Ceasar C. Mitchell, former Council members C.T. Martin and Kwanza Hall, and fellow City Council members honored King with a proclamation March 17, 2014 for his role in the Civil Rights Movement and continued work on racial equality in the ensuing years.
Council member Bond and District 10 Atlanta City Council member Andrea L. Boone, children of Civil Rights Movement leaders Julian Bond and Joseph E. Boone, respectively, spoke of King’s tremendous impact.
“Dr. King was the individual [who] inspired the Atlanta Student Movement that desegregated Atlanta and led to the narrative of Atlanta being the ‘City Too Busy to Hate,’” said Bond. “… We have lost one of the greatest, yet most woefully unsung Civil Rights giants of this generation.”
“He left an indelible mark on our city as an activist and leader,” said Boone. “… [H]e will never be forgotten. With his humble work in life, he has truly left his footprints in the sands of time.”