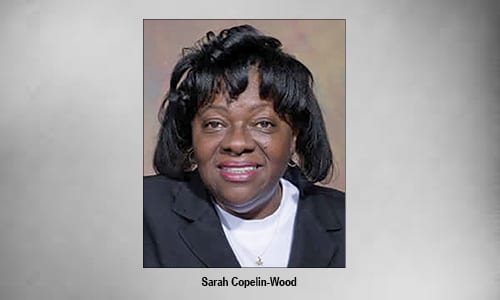 Former DeKalb County School Board member Sarah Copelin-Wood was laid to rest on Thursday, Aug. 23, at the Chapel of Donald Trimble Mortuary in Decatur.

At the homegoing, Teresa Hardy, president of the DeKalb branch of the NAACP, presented a resolution honoring Wood, who had a long career as a community activist, which included serving 20 years with the NAACP.  Most notable among her committee memberships was serving as chair of the annual Dr. Martin Luther King, Jr. Parade and Rally for eight years.

Copelin-Wood was elected to the DeKalb Board of Education in 1999 and served until 2013, representing District 3. During her 15 years on the board, she served as chair and vice chair.

Said Hardy: “Sarah was a strong and visible advocate for all DeKalb County public schools, students and staff and she supported those public charter schools that met State of Georgia requirements. She was instrumental in creating DeKalb School System’s first and only DeKalb Elementary School of the Arts. She facilitated the change of the School Board’s  meeting time from 5 to 6 p.m. to better accommodate working parents. She was steadfast in her opposition of the installation of cell phone towers on school property in her district.”

Copelin-Wood received the DeKalb NAACP Lifetime Achievement Award in October 2015 under John Evans’ leadership as president of the NAACP.