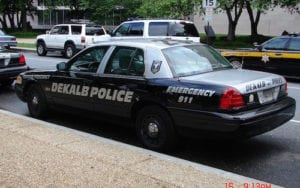 Officers are working staggered shifts, primarily during overnight hours, to provide protection and increased visibility to the Wesley Chapel/Panola Road businesses that are located in the CID.

“I will use a variety of enforcement options, such as high-visibility patrols, the operation of speed detection devices, safety checks and foot patrols,” Sowell said. “The officers will operate in the targeted areas during certain peak hours of crime. The areas will be identified by analytical data, lookouts and persons of interest provided by the crime analysis.”

CID Administrator Nicole McGhee Hall said the added security is the first phase of public safety-focused plans for the commercial community. Additional resources may be considered as well as expanded coverage areas.

“Increasing public safety is a key component of the CID’s commitment to making this a more economically attractive environment,” Hall said. “We are pleased to have these brave men and women provide their law enforcement expertise to keep commercial properties and their owners, employees and clients safe. We expect to see an immediate positive impact from the presence of these officers throughout the CID.”

As part of their safety services, officers will generate patrol reports detailing their experiences for the benefit of CID leaders. These insights will allow the CID to reach out to commercial property owners and business leaders to advise them of concerns and trends. Additionally, an officer will provide an overall safety update as part of the CID’s regular Board of Directors meetings.

The East Metro DeKalb CID formed in 2014 through a unanimous vote of the DeKalb County Board of Commissioners. CID membership is growing, increasing the revenues to leverage more project funding. The CID accounts for more than 205 commercial property owners.

nextUpcoming Events + Things to Do